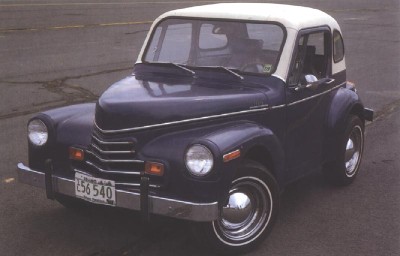 When you talk about the 1975 Leata, or any unusual car, people say, "It was ahead of its time!" You hear the cry anywhere you find an unconventional automobile. Drive up in a "Step-down" 1948-1954 Hudson or any Crosley, and you're sure to trigger a Pavlovian response from someone in the gaggle of onlookers: "Boy, it was ahead of its time!"

Hudson ahead of its time? A very good car indeed, but a case could be made that, with its bathtub styling and flathead six, it was about 10 years behind its time, at least by 1954. Crosley ahead of its time? Sure, it seems to have prefigured today's subcompact, but it was a tinny, underpowered, bare-bones affair. Does anyone seriously think it would sell like hot cakes today?

Such automobiles were not ahead of their time, but rather outside their time. They were anomalies, breaks with the standard practices of their era. As economic realities, government regulations, and a general loss of vision gradually spread a pall of sameness over the auto industry, such anomalies popped to the surface less and less often. But when they did, they were (and are) worth the attention of anyone interested in collectible automobiles.

The year 1975 saw the birth -- and demise -- of one such car, the Leata. It was built by the Stinebaugh Manufacturing Company of Post Falls, Idaho, a firm headed by founder Don E. Stinebaugh. In a way, Stinebaugh himself was as an anomaly, and an inventor (a term not heard as often today as 50 years ago). Out of his Post Falls shop came some 48 patented ideas and devices, including a powerful snowmobile engine which made him a fair amount of money. And from his fertile brain and enthusiasm came the Leata.

In the early days, automaking was often a cottage industry, with small manufacturers from all over the country building what were really "assembled" cars. Most were gone by the Thirties. But one such car -- Leata -- found itself "outside of its time" in 1975 in Post Falls, Idaho.

Having lost his mother as a young boy, Stinebaugh grew up with grandparents in the lovely northern Idaho valley near Lake Couer d'Alene. He gained his mechanical knowledge by apprenticing at age 15 with an uncle who worked as a machinist at the Spokane, Washington, airport. Strong family ties run through the body of his life's work. For example, Leata (pronounced LEE-tah, not Lee-AH-tah), was his wife's pet name, a Norwegian diminutive equivalent to "small" or "tiny." And the decision to produce a motorcar grew out of a project Stinebaugh planned as a wholesome activity for his four sons. "I kept them busy and I kept them out of trouble," he said.

Continue to the next page to learn about the all the pieces that came together to create the 1975 Leata.