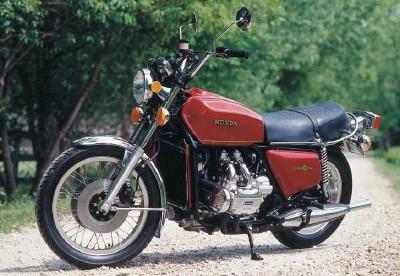 Introduction of the 1975 Honda GL1000 Gold Wing motorcycle signaled that this Japanese manufacturer had become a world leader in motorcycle technology.

The "fuel tank" was nothing more than a cover for the electronics; the real tank was located between the two side covers for a lower center of gravity.

The price to be paid for all these features was weight, as a bare-bones 1975 Honda GL1000 Gold Wing motorcycle tipped the scales at a hefty 584 pounds. And being a touring mount, most riders added a fairing, saddlebags, luggage carrier, and other options that hiked the total up even further.

In the first five years of production, Honda sold just under 100,000 copies of a motorcycle that would become a legend.

The original Gold Wing has since grown into a six-cylinder, 1500-cc behemoth that comes complete with a reverse gear and more electronic amenities than the space shuttle.

Go to the next page to see more pictures of the 1975 Honda GL1000 Gold Wing motorcycle. 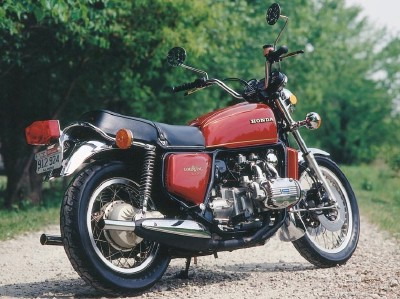 The Honda GL 1000 Gold Wing was rarely seen in this as-delivered 'bare-bones' form.

The 1975 Honda GL1000 Gold Wing motorcycle did to the touring market what the CB750 had done to the performance market several years earlier. Rarely was a Gold Wing seen au naturel as shown here; they were usually loaded down with fairings, bags, and travel trunks.

The Gold Wing ran a 999-cc flat-four water-cooled engine and had shaft drive.
Fairings, bags, and travel trunks became the Gold Wing norm, as did journeys of hundreds of miles per day.
The Gold Wing featured triple-disc brakes. The fuel was carried in the side pods under the seat for a lower center of gravity.
An early Gold Wing ad consisted of little more than glowing reports from various motorcycle magazines.