by the Auto Editors of Consumer Guide
Next
The 1975-1978 Jaguar XJC was a neat-looking hardtop derivative of the superlative Jaguar XJ sedan, built only on the original short-wheelbase Series I platform.

Called "the corporate sports car" by Jaguar's U.S. advertising agency, and "the corpulent sports car" by one agency wag, the 1975-1978 Jaguar XJC was originally scheduled to be launched along with the Series II sedans in late 1973. Actual production was considerably delayed, however, because of structural rigidity bothers.

This was a rival in concept for the "New Generation" Mercedes-Benz hardtops of the day, but the XJC didn't sell well, perhaps because of its restricted rear seat space, the very thing that led to adoption of a longer wheelbase for the sedans. Plush leather and walnut interior, neat styling, and smooth, powerful engines (your choice of the traditional dohc six or the new V-12) combine with low production to make the XJC a high-potential collectible. 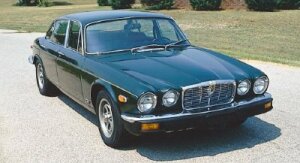