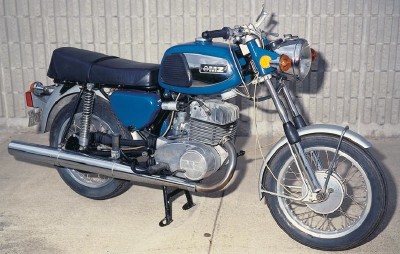 With origins in Zschopau, East Germany, the 1974 MZ TS250 motorcycle was about what you would expect from the former Soviet Bloc territory. Looking at this street machine, it would be hard to guess MZ had any racing blood in its veins.

Powered by a simple 250-cc two-stroke single, the1974 MZ TS250 motorcycle was not about to set any speed records.

But despite such limitations, MZs are popular in Europe. MZ, in fact, was the leading builder of motorcycles in Eastern Europe for many years.

Not only were MZs popular with the masses, they were accomplished in several arenas of racing, including trials and road circuits. Mike Hailwood rode a factory MZ race bike before his stint with Ducati.

Though silver paint substitutes for chrome plating on the fenders, the bulbous fuel tank is dressed to kill with its chrome side panels. Chrome plating is also found on the large headlight nacelle.

Suspended with common underpinnings and slowed with nothing more than drum brakes, the 1974 MZ TS250 motorcycle is a basic mount, but in the mid 1970s, it dutifully filled its homeland's need for simple transportation. 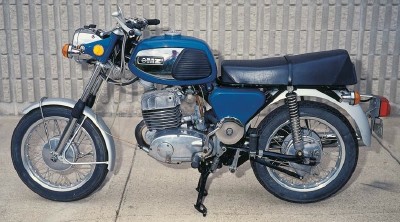 The 1974 MZ TS250 motorcycle featured a chromed tank side panel and chromed headlight, though the mirror and fenders are done in budget-minded silver paint.

The single-cylinder two-stroke is no road burner, but it isn't meant to be.
The headlight is chromed, though the mirrors and fenders are painted silver.
The gas cap heralds MZ's string of victories in the International Six Days trials event.