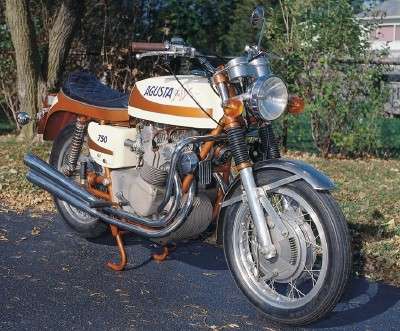 The 1974 MV Agusta 750 GT motorcycle was designed to satisfy buyers looking for performance and luxury in the same machine. It succeeded grandly.

Having its roots in aviation is only fitting for one of Italy's most respected racing marques. During its heyday, MV Agusta claimed 37 Manufacturer's World Championships, and its fleet flyers occupied the winners circle at the end of 270 Gran Prix races.

After World War II, MV turned its attention from airplanes and helicopters to small motorbikes, which were in great demand throughout Europe.

But it was racing that most interested the company, and MV duly entered competition with a 500-cc four-cylinder machine in the early 1950s.

Success with that and smaller racers followed, though MV's street bikes of the period were smaller singles and twins. That changed in 1965m with introduction of a 600-cc four-cylinder road bike.

Fours weren't at all common at that time, but this one was nothing special in the performance department thanks to high weight, a mild state of tune, and shaft drive -- the last a bit of a detriment because it forces the power flow to take a 90-degree turn, which saps some of the energy. Nevertheless, MV fours would retain shaft drive for the next 15 years.

In the late 1960s, MV brought out the 750 Sport. As the name implied, this was a performance-oriented machine more in keeping with the company's racing heritage.

Its double-overhead-cam engine was later bumped up to 790 cc, though the bikes still wore "750" markings. The change boosted horsepower from 69 to 75.

The 1974 MV Agusta 750 GT motorcycle was aimed at both speed and comfort, being fitted with high handlebars, a large fuel tank, and diamond-quilted seat.

Like all MV Agustas, it remained extremely expensive, especially compared to the Japanese fours that were by that time dominating the market. Relatively few 1974 MV Agusta 750 GT motorcycles were sold. 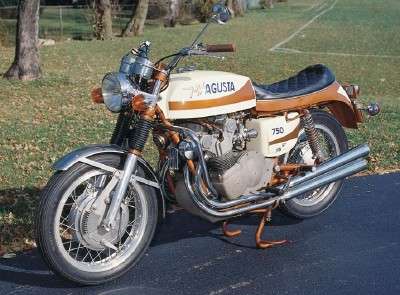