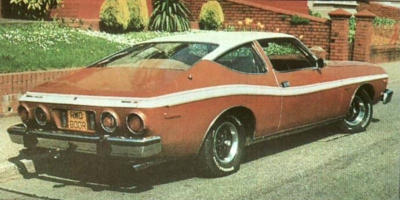 The sporty 1974 Matador had an undeniably unique look, a bonus for advertising.
©2007 Publications International, Ltd.

American Motors rolled out an impressive 1974 AMC Matador advertising program to launch the new Matador coupe. To make sure the public understood this really was a new car, headlines blared "Newest Mid-Size For 1974." Copy stated, "This is one mid-size car you've never seen before. See why experts are already calling it America's sportiest new car."

In the previous year, an AMC advertising promotion had lampooned both the modest sales and relative anonymity of its mid-size models by posing the question "What's a Matador?" For 1974, American Motors answered its own question with color postcards of its glamorous new mid-size offering. "WHAT'S A MATADOR?" the card asked rhetorically "THIS IS!" AMC expected big things from its new car and production was cranked up accordingly.

Members of the motoring press swarmed to the Matador and for the most part they loved it. Car and Driver said, "There's an undeniable smugness stamped into the fenders of AMC's new Matador X. And each arrogant crease is integral to an overall air of confidence."

Of the Cassini version, Car and Driver stated, "You won't be able to miss it if you travel in high fashion circles. Nor will you pass by the Matador's shapely exterior without serious consideration. While it lacks the refinement of a Chevelle or a Torino from several standpoints, it is undoubtedly this year's style leader." Road & Track magazine felt the Matador was "Sleek & fast but oversize and thirsty."

The new coupe even made it to the race track, but had an inauspicious first year. Fielded by Roger Penske Racing, the Matador spent the year gradually working its way up through the NASCAR standings before Bobby Allison bagged the team's first win in the season finale at the Los Angeles Times 500 in Ontario, California.