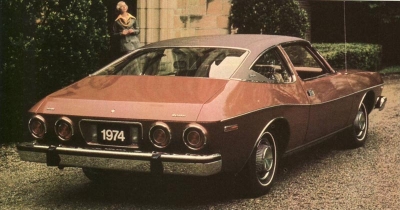 American Motors put a simple question before car buyers in the early 1970s: What's a Matador? But AMC's product planners thought they already knew the answer. To them, the 1974-1978 AMC Matador was just the thing to contend with the bull market for plush mid-size coupes that sprang up after the end of the muscle car era.

A respected automobile magazine publisher, commenting about American Motors's mid-1970s Matador coupe, sagely noted, "It didn't look like an AMC car -- it looked like it came from GM."

He meant it as a compliment. It recalls, too, the opinions that were held at the time by both AMC and the automotive press: This was something that was truly different and exciting. When it debuted, initial responses to the bold design indicated the coupe might become one of the hottest AMC cars ever. For a while, the press and the public loved it.

The program to redesign the Matador for 1974 represented a new direction for American Motors. Gerald C. Meyers, vice president of product development, had his product planners at work on ideas for a revamped mid-sized product.

The original Matador line, introduced in 1971 to replace the Rebel series, consisted of a staid four door sedan, a station wagon, and an uninspired two-door hardtop. The sedans and wagons offered excellent value and were fairly popular. The problem seemed to be with the two-door models; hardtops generally appealed to people looking for exciting styling and in that regard the Matador just wasn't up to the job.

Company studies indicated the best opportunity for increased sales volume lay in designing a new two-door Matador to appeal to buyers looking for sporty styling. There was plenty of evidence to support this conclusion in the rest of the industry as well. Intermediates were outpacing the market. The new-for-1970 Chevrolet Monte Carlo was an exceptionally hot-selling car; so were Pontiac's LeMans, Oldsmobile's Cutlass, and Ford's Torino. The glamour stars of the mid-size market were all hardtops or coupes, with styling as their greatest selling point.

The task of redesigning the Matador went to AMC Styling, under the direction of VP Richard Teague. His staff was allowed more freedom than usual because of a decision to allow the new Matador to be designed strictly as a coupe. Free of the constraints of trying to produce sedan and station wagon variations with the same lines, the designers would be able to style their coupe as rakishly as sheetmetal could be made to look.

See the next page to learn about the 1974 AMC Matador Coupe.