The End of the Bricklin SV-1 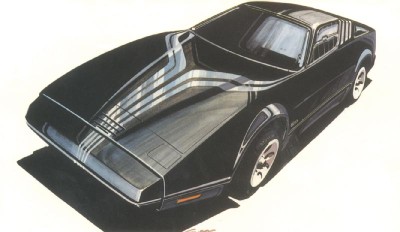 Although the Bricklin failed after just two model years, before that happened designer Herb Grasse created renderings for a Bricklin 'Chairman.'
PIL

September 1975 marked the end of the Bricklin SV-1. Premier Hatfield, the leading proponent of the Bricklin venture and a political hero to the people of New Brunswick for bringing in a manufacturing concern and raising the employment potential, was losing ground. An additional $10 million that Bricklin requested from the province to continue operations was not to materialize.

The factory thus shut down, and was put into receivership on September 25. Armed guards were posted to prevent looting or ex-employees from entering the factory. Cars stood half-assembled on the line, some without engines, doors, or even bodies. Creditors flew in like vultures to clean out the remains. Employment contracts and promises became worthless; salaries went unpaid.

Weeds would again grow up around what had briefly been a thriving factory. And despite rumors (and hopes) to the contrary, its doors would remain closed because Bricklin's efforts to refinance were fruitless. To add insult to injury, Bricklin suffered personal bankruptcy as a result of his efforts.

George Byer and Sol Shank of Consolidated Motors, an automotive liquidator out of Columbus, Ohio, came in and purchased the majority of the parts and remaining cars left on the line. These cars surfaced later, completely assembled, some sold as 1976 vehicles. Though not assembled at the factory, they sported official-looking VIN plates. Authority to finish the remaining 1976 cars had been granted to Consolidated Motors at the time of the auction.

Some ex-employees continued to service and work on Bricklins after the fact because of the lack of service expertise generally available. Dealerships designated as warranty stations refused to continue servicing Bricklins because previous warranty claims remained unpaid by the factory.

The Bricklin Chairman was intended to be the face-lifted Bricklin for 1976.
PIL

Among the former employees of Bricklin, Jeff Neal, Glenn Nutting, and Terry Tanner provided parts and service long after the factory closed. Tanner developed improvements, new products, and updates from the original that have been instrumental in the preservation of SV-ls. Working in a hangar-sized shop near the Blue Ridge Mountains of Virginia, outside the small community of Bedford, Tanner stored upwards of 35 Bricklins while painstakingly restoring, repairing, and painting others.

Tanner was also instrumental in establishing an international organization whose members banded together in desperation to exchange information, parts, and tech tips. Bricklin International's members own the majority of the Bricklins still on the road. Most of the remaining cars are entered into the club's database, the Brick-file, a compilation of SV-1s by color, state, and identification number (which lists color, engine, transmission, and production date).

BI's membership has taken advantage of the technical information and expertise available to make their SV-1s better than ever. Bricklins entered in car shows across the country triumphed in their category, and are regaining the respect lost when the cars were in production.

The reputation of undependable doors, falling door glass, and poor electrical systems is now a thing of the past. Bricklin SV-1s already considered a collectible in automotive circles and are now reaching for their very own "classic" status.