Problems with the Bricklin SV-1 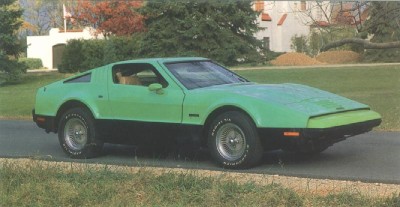 Problems with the Bricklin SV-1 meant that Malcolm Bricklin's dream of an affordable, gull-winged vehicle that doubled as a high-performance sports car was destined to be greatly modified before the first car rolled off the assembly line. Its aerodynamic design was a tribute to its designers' foresight, and auto magazines and car enthusiasts welcomed the SV-1 as the first serious challenger to the American "King of the Hill" Corvette. Alas, the dream was not to be.

The first sign of trouble surfaced in the attempt to mate heretofore non-compatible materials. Body panels were molded out of an acrylic material which also contained the color and was backed by fiberglass. The acrylic came in five "safety" colors, reportedly the five most visible colors on the road: Safety White, Safety Red, Safety Orange, Safety Suntan, and Safety Green.

The acrylic-fiberglass laminate was highly susceptible to temperature changes, appearing to have a mind of its own. On the plus side, the acrylic skin was impervious to dents, scratches, and resisted all the imperfections associated with paints and primers. Twenty years later, a wax job on an acrylic skin would return it to its former showroom gloss. Although a 10-pound sledgehammer would only scratch the surface, the formula was its own worst enemy in terms of production tolerances.

The second major hurdle was dumped into the lap of the engineering department by a special request from Malcolm Bricklin. He wanted automatic gull-wing doors at any cost. After many different solutions were offered, a hydraulic system driven by an electric motor was finally settled upon.

Unfortunately, a high failure rate and resulting warranty repairs continued to rise as the cars were distributed along the Eastern seaboard to more than 300 dealers. The system was complex and foreign to mechanics in the field. That aggravated the unreliability problem, giving the car a bad reputation and a lot of bad press. It was in fall 1975, after the factory closed, that Terry Tanner developed a reliable door system based on a vacuum pump and air pressure.

Reliability was a key that Bricklin had a hard time latching on to. As it turned out, the two most unique aspects of the car -- the body material and the gull-wing doors -- were at the same time its most valuable assets and its costliest liabilities.

For reviews of the Bricklin SV-1, continue to the next page.