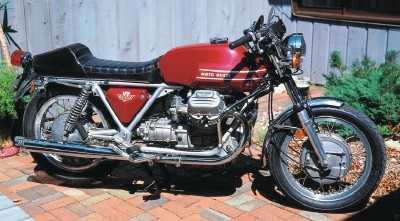 Moto Guzzi began building motorcycles in 1920, and quickly became known for its horizontal single-cylinder engines with the cylinder pointing straight out toward the front wheel. Surprisingly, this design carried on for more than 45 years with only minor changes.

Most of these singles displaced about 500 cc, and though many Moto Guzzis had a sporting nature, none were really fast.

During that same time period, however, the company produced some racing machines that were very technically advanced, including supercharged triples and, in the mid-1950s, a magnificent V-8.

It wasn't until the mid-1960s that Moto Guzzi replaced the horizontal single with its now-famous V-twin. Mounted in a bike called the V7, this engine initially displaced 700 cc, but was bumped to 750 cc in 1969.

The V7 used shaft drive in place of a chain, and when fitted with the proper accessories, made for an impressive touring mount. But in an effort to reach a more sporting audience, Moto Guzzi rolled out a trimmed-down version that was called -- appropriately -- the V7 Sport.

All Moto Guzzis got a new frame and a front-mounted alternator in 1972, which allowed for a lower seat height; in the case of the V7 Sport, it measured only 29-1/2 inches off the ground.

When combined with the Sport's relatively flat handlebars, it resulted in a low riding position and low center of gravity, which helped the 1973 Moto Guzzi V7 Sport motorcycle hold true to its name.

Check out the next page for more pictures of the 1973 Moto Guzzi V7 Sport motorcycle. 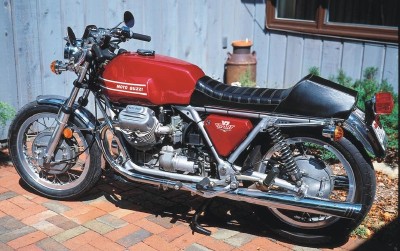 A low center of gravity -- the seat was less than 30 inches off the pavement -- added to the V7 Sport's feeling of agility.

The 1973 Moto Guzzi V7 Sport motorcycle was an Italian take on the street sportbike. The original V7 0f 1968 was a more-upright motorcycle aimed at the touring market.