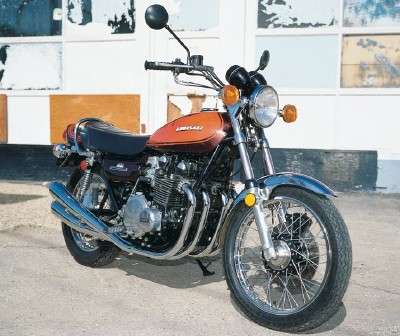 The 1973 Kawasaki Z-1 motorcycle was the notable outcome of Kawasaki's mad dash to match the introduction of the landmark Honda CB750 in 1969.

Kawasaki had made its mark in the U.S. with its fast but frightening two-stroke triples, but Honda's success with its more civilized CB750 Four did not go unnoticed.

The market was beginning to lean away from two-strokes in general, and Kawasaki wanted to maintain its performance image while offering a more roadable four-stroke machine.

Introduced in 1973, the Z-1 boasted a 903-cc double-overhead-cam inline four that significantly upped the performance ante. That engine soon became the benchmark other companies would aim to beat, and it proved to be a bulletproof design that continued as a dominant force in racing circles for years.

In contrast to the strong-running powerplant, however, the chassis of the Z-1 was notoriously unstable. Several aftermarket manufacturers quickly devised more competent frame designs that could be filled with Z-1 power.

No color options were offered for the U.S. market: All Z-1s were painted brown with orange accents. Not considered a particularly appealing combination at the time, many early Z-1s received custom paint treatments shortly after leaving the showroom.

Keep reading for more pictures of the 1973 Kawasaki Z-1 motorcycle. 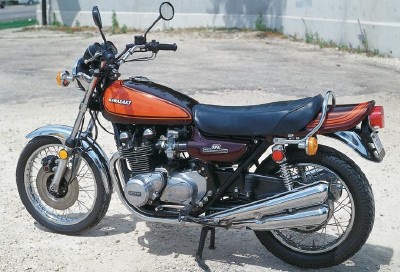 All Kawasaki Z-1s came from the factory in a brown-and-orange color scheme.

The 1973 Kawasaki Z-1 was notable for its high horsepower and state-of-the-art engine, but the chassis wasn't up to the powerplant's standards.