It's said that misery loves company, and the 1974 Oldsmobile Cutlass had plenty of both. The new model year was just starting when the Organization of Petroleum Exporting Countries (OPEC) temporarily restricted the flow of oil to the West after war broke out in the Middle East. With gasoline expensive and hard to come by, jittery consumers sought out small, fuel-sipping cars.

This was hardly a strong suit for Oldsmobile, which had but one six-cylinder model in its entire fleet. Frankly, though, much of the rest of the U.S. industry was in the same boat. (The only domestic four-cylinder cars at the time -- the Chevy Vega, Ford Pinto, and related Mustang II -- each had their best model year ever.) Even though its total production fell by 34 percent, Olds­mobile held third place among Ameri­can manufacturers. Cutlass demand slumped less drastically, but still dipped to 295,268.

Changes for Cutlass were minimal for 1974, considering that the previous year had brought a completely new design. The Cutlass S, Cutlass Supreme, and wagons shared the same front end, with vertical-bar grilles and parking lamps mounted in the fiberglass front-end panels rather than under the bumpers as before.

The base Cutlass grille had a horizontal-bar design with the parking-lamp/turn-signal lenses mounted in the bumper. Heftier bumpers were used at both ends (the rears now able to withstand five-mph impacts) and taillight lenses newly sat flush with the ends of the fenders of coupes and sedans.

The $361 Salon package was extended to the Cutlass Supreme coupe, and that soon-to-be-staple of the Seven­ties, the landau half-roof vinyl covering, joined the options list for the upmarket two-doors. Also, the Vista-Crusier gained a stablemate, the Cutlass Supreme Cruiser. By doing without the Vista-Cruiser's faux paneling and Vista Vent, the Supreme Cruiser saved wagon shoppers $210.

Engine choices stayed the same, apart from a slight blip in the torque specifications of the 350 and a 20-bhp cut to the 455 V-8. Manual gearboxes were out, leaving the Turbo Hydra-matic as the sole trans­mission. Power steering became standard on all models.

A Hurst/Olds with removable roof panels served as the pace car for the 1974 Indianapolis 500, with former race winner Jim Rathmann at the wheel. A Hurst/Olds for the street that mimicked the look of the Indy pacer (albeit with a fixed roof) was available on the Cutlass S coupe. Buyers had their choice between an H/O with the 230-horse 455 (option W30) or the 200-bhp 350 (option W25; mandatory in California). Hurst records show that 1800 were made for '74. 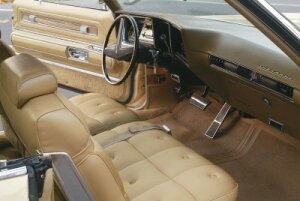