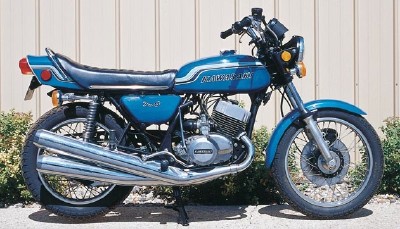 The landmark Kawasaki H2 750 IV was known not only for its speed, but for its tricky handling

The 1972 Kawasaki H2 750 Mach IV motorcycle was one of the quickest bikes of the early 1970s, but also one of the most difficult to master.

Founded in the late 1800s, Kawasaki has been into everything from planes to trains to shipping. It began supplying small motorcycle engines, complete with transmissions, to other manufacturers just after World War II, and began offering its own bikes in 1960.

This new segment of the company advanced -- and grew -- quickly. One of the manufacturers using those small engines was Meguro, which Kawasaki bought out in the early 1960s.

The first motorcycles to wear Kawasaki badges were 125-cc commuter bikes. These didn't sell well when the company exported them to the United States.

But Meguro had also been building a 650-cc four-stroke overhead-valve twin under license from BSA (the English company's old pre-unit model). This rather tame motorcycle met with a fair degree of success in the U.S. when introduced as the Kawasaki W1 in 1966.

But better -- and faster -- models were yet to come. First up was a 250-cc two-stroke twin called the Samurai. The Kawasaki Samurai was certainly an about-face in philosophy from the W1.

Fitted with rotary disc valves, it was a hot little number, and the temperature was raised further by the 350-cc Avenger that followed.

And then came the big one.

In the midst of numerous new "superbikes" being introduced by Triumph, BSA, and Honda, the Kawasaki 500-cc H1 Mach III two-stroke triple stood out as a ferocious performer at a cut-rate price.

Light and very powerful, with 60 horses that seemed to lie in wait and then suddenly stampede when the revs built up, rumors spread of Mach IIIs rearing up to throw their riders off on the first test drives. But in the raging superbike wars, "too much" was still not enough.

Enter the 750-cc 1972 Kawasaki H2 750 Mach IV motorcycle. With 74 horsepower on tap, it was even more fearsome than the Mach III. And not surprisingly, it inherited several of its predecessor's flaws, namely squirrely handling, a propensity to wheelie, and horrific fuel mileage.

So although it was perhaps the ultimate performance two-stroke of the day, the market -- and Kawasaki -- would soon drift toward more civilized four-strokes.

Go to the next page for more great pictures of the 1972 Kawasaki H2 750 Mach IV motorcycle. 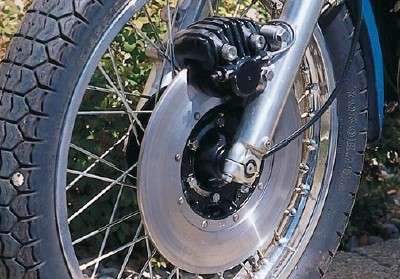 The Mach IV, like its predecessor the Mach III, was a "powerbike" that could unleash its horsepower suddenly as the revs built up.

tended to lift in full-throttle starts.
The power output of the 750-cc triple engine proved troublesome for the unwary.
The three-pipe exhaust system mounted two pipes on one side, one on the other.