Ragtop demand was waning by 1972, and Corvette's convertible was no exception. This 1972 wears optional whitewall tires, also starting to fall from favor among Corvette buyers. See more classic car pictures.

In 1972, performance was being muted as engines bore the full brunt of emissions-lowering tuning. And the 1972 Corvette was no exception.

All manufacturers started quoting engine outputs in the new SAE "net" measure that year, figures that were always lower than the "gross" numbers issued previously. Net horsepower reflected power losses caused by mandatory equipment such as the water pump, alternator, power-steering pump, mufflers, and air cleaner, and were thus more realistic. (GM had begun listing both net and gross figures in 1971, possibly to dampen the blow of suddenly lower power figures that would appear for '72.) The result was that advertised engine outputs were drastically reduced, partly due to steadily decreasing compression ratios but mostly due to the new net ratings. 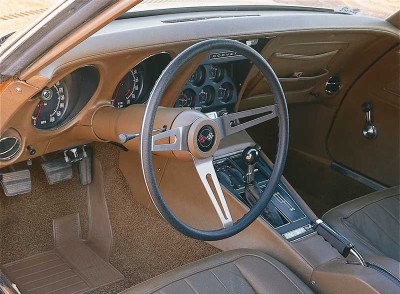 The Corvette's center console was redesigned for 1972 to eliminate distracting fiber-optic light monitors.

There were also fewer engines offered for the 1972 Corvette, the casualty being the top-rated LS6 big block. The LT1 small block eased from 275 net bhp to 255 in this, its final year. At least it could finally be ordered with air conditioning. Chevy engineers had been reluctant to offer this combination, fearing the LT1's high revving ability would pull the A/C belts off their pulleys; to help counter this tendency, tachometers on cars so equipped were redlined at 5,600 rpm rather than 6,500 rpm.

Refinements for the 1972 Corvette included a redesigned center console that deleted the useful but distracting fiber-optic light monitors, and the previously optional anti-theft alarm system was made standard in recognition of the Corvette's popularity among car thieves. Sales continued crawling back upward, tacking on nearly 5,200 units for a model year total of 26,994.

At that year's 24 Hours of Daytona, Tony DeLorenzo and Don Yenko scored another GT victory for the Corvette while finishing a surprising fourth overall. John Greenwood took his Corvette on to LeMans, where he qualified faster than any other GT contender. Unfortunately a blown engine during the race (he was leading the class at the time) forced him out of the running.

Fewer engine options and lower horsepower due to emissions restrictions marked the less-powerful yet still good-looking sports car. Here are the specifications for the 1972 Corvette: