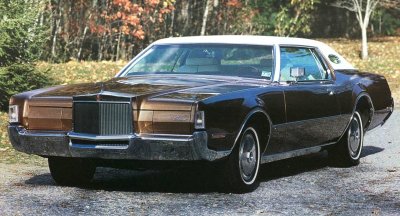 In 1972, the Lincoln Continental Mark IV's bumper was created before federal regulations outlawed the drop-center look.

The 1972 Lincoln Continental Mark IV was ground-up new, styled by Wes Dahlberg under Dearborn design chief Gene Bordinat. Dahlberg may be the first designer in Ford history who had charge of both the exterior and interior on a single car. His challenge outside was to preserve Mark III visual cues within a distinctly different look.

Again, frame and inner body structure were shared with the Thunderbird, which was also redesigned for 1972 to be as big as it would ever get. This time, though, suspensions would differ.

Up front were the usual coils and unequal-length A-arms, but the Mark arrangement wasn't exactly the same as the T-Bird's. Coil springs reprised in back, but specific new four-link geometry with a stabilizer bar replaced the previous Mark's three-link track-bar setup.

Lower arms were stamped and conventionally mounted, but the forged-steel uppers angled inward toward the frame from mounts behind the axle housing. The primary reason for this so-called "STABUL" design was increased rear seat room, but a side benefit was a somewhat softer ride.

Steering was still geared at 21.76:1, but the mechanism was reworked for less road feel (to the chagrin of most reviewers).

Against its predecessor, the Mark IV was 3.2 inches longer in wheelbase (120.4), four inches longer overall (at 220.1), and 1.3 inches lower (52.9). It was also 211 pounds lighter (4,782 at the curb), yet it looked heavier thanks to extra overhang at each end, greater cant to windshield and backlight, thinner A-pillars, slightly bulged body sides, and larger rear wheel cutouts.

A pseudo-Rolls grille again separated headlamps concealed by electrically operated flip-up doors. The grille itself, however, sat more deeply in the bumper, and stylists made it appear taller without changing hood height by dint of a wide U-shaped central bumper cutout.

A wide-quarter vinyl-covered roof was a Mark III signature, but the IV offered a new touch of old-fashioned formality in small double-pane oval "opera windows" cut into the C-pillars. They also provided some welcome over-the-shoulder visibility for drivers.

Each window was adorned with an etched four-pointed Continental star that was silver-filled on the inner surface of the outer pane. Initially standard, then optional from mid-year, these windows began a styling fad that soon swept Detroit.

As with the full-size Continental, Lincoln's big 460-cid V-8 was detuned for 1972, with lower compression to permit use of unleaded gas. Horsepower dropped from 365 to 212 (12 fewer than quoted for the Continental), but the loss wasn't quite what it seemed because Ford, like other Detroit makers, switched to more realistic SAE net ratings.

Lincoln's three-speed automatic transmission was carried over with minor internal improvements and a quadrant shifted from the steering column into the instrument cluster.

The Mark IV dashboard was a major change from the four-pod Mark III design. Crashes with test dummies at the wheel dictated a new three-pod layout in a heavily foamed, hooded, and recessed panel. If arguably less attractive, the Mark IV panel met federal rules, which also prompted a switch from real wood to splinter-proof burl-grain plastic on dash and door panels.

Go on to the next page to learn about the 1972 Lincoln Continental Mark IV interior.