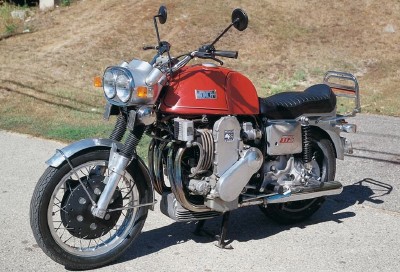 The 1971 Munch TTS is from a low-volume German maker; it's said no two Munchs were built exactly alike. See more motorcycle pictures.

Embracing the philosophy that "bigger is better," Friedl Munch of Germany introduced the bike that bears his name in 1966.

At a time when it was rare that a motorcycle was larger than 750 cc (Harley-Davidsons excluded, of course), the first Munch carried a 1000-cc four-cylinder NSU automotive powerplant -- and they would get even bigger.

By the time production wound down in the 1980s, displacement was up to 1286 cc, resulting in 104 fuel-injected horsepower.

It's rumored that no two Munch bikes were exactly alike. Styling can best be described as bulky, weight the same.

The 1971 Munch TTS motorcycle pictured with this article is powered by a 1200-cc four. Its dual headlights are a Munch trademark.

It also has a "turbine vane" cast rear wheel, spoke front wheel with huge drum brake, and a full complement of gauges, including a clock.

Go to the next page for more pictures of the 1971 Munch TTS motorcycle. 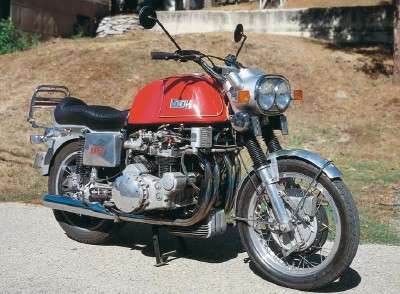 Over the two decades of its existence, Munch built only about 250 motorcycles.

The 1971 Munch TTS was an unwieldy but powerful machine. The one pictured here boasts a 1200-cc four.

Full instrumentation includes a clock.
Dual headlights were a Munch trademark.
The front wheel was equipped with a massive drum brake.
The bike's engine specifications were part of its badge.
The "turbine vane" cast rear wheel helped carry the Munch TTS's hefty weight.