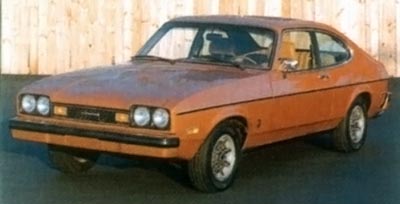 Nine exterior color choices were offered on the new hatchback body for the Capri II.

As with the earlier Mercury Capri model, the American press couldn't wait to put the 1976 Mercury Capri II to the test. Road & Track tried two V-6 Capri IIs, one a fully equipped Ghia, and the other a standard model.

"It goes, it stops and handles, it's well built and it has that sturdy, precise European character that makes it something special for Americans and Canadians," R&T proclaimed in its summation of the V-6 Capri IIs. "On top of all this, it's a more practical car because of its new hatchback body. A quality European car at a realistic price -- what more could one want?"

Premature wrinkling of the plastic insert moldings in the urethane bumpers started to pop up in 1974. This required warranty work to replace the strips once a suitable substitute material was found, a remedy not found until spring 1976. Clutch shudder was noted on a number of the V-6 models; this was later attributed to the routing of the cable too near to the exhaust manifolds. However, all manufacturers in the mid-Seventies were experiencing these and many other minor problems as they learned to deal with new materials and government requirements.

If 1977 was to be the last full model year for the Capri in the United States, one couldn't tell from the number of improvements and model name additions. The V-6 received a compression boost to 8.7:1 and the Dura-Spark ignition system. This boosted horsepower and torque very slightly, but still decreased reported fuel consumption by up to three miles to the gallon. Meanwhile, the base four-cylinder engine picked up 3.5 horsepower through tuning improvements, going to 91.5 horsepower at 5,000 rpm, and was teamed with a numerically lower 3.22:1 rear axle to keep up fuel economy.

Referred to in factory advertising as the "Capri for 1977," there were a few new items to be touted. Basically, the exterior was unchanged from the 1976 season. One marketing change was the renaming of the sporty "S" package, now promoted as "Le Cat Black 'S'," for after all, it was being sold alongside Mercurys and was still a cousin to the Cougar under the "Sign of the Cat." This sporty appearance group, which included all the features from the year before, cost $241. (Also, a dealer-installed Rally Cat decor package added twin racing stripes on the hood and decklid, a rear spoiler, and bold rocker-panel stripes.)

Prices were on the way up with the standard 1977 Capri hatchback climbing to $4,361, or about a 6 percent increase over the previous year. For those stepping up to the luxury of the Ghia edition, the tab came to $4,984, a boost of $244.

As though the wind had gone from the sails, 1977 calendar-year sales fell to 22,458 units. By the early summer, importation of the Capri was put on hold until existing stock could be sold off. The final 4,079 examples were sold -- and titled -- as 1978s and then the books were closed on the car in America.