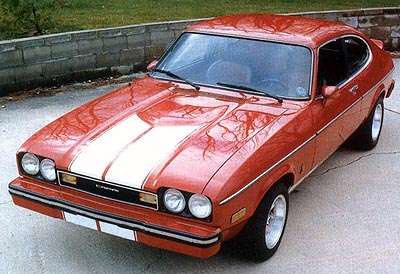 One item that was totally new for the 1976 Mercury Capri II package was a new 2,300-cubic-centimeter overhead-cam inline four produced at Ford's Lima, Ohio, engine plant. It weighed nearly 500 pounds more than the British 2.0-liter it was replacing, but was rated for 88 horsepower at 5,000 rpm and developed 116 pound-feet of torque at 2,600 rpm.

The standard package included some familiar features from the past plus improved front and rear stabilizer bars, 165SR × 13 steel-belted radial tires, fully reclining front bucket seats, the return of full instrumentation, and a fold-down rear seat to accommodate large loads that could be placed in the car through the lift-up hatch. Also new, though less positive, was a starting price that shot up to $4,117. Another $217 fetched the Decor Group option that included, among other things, embossed vinyl seats, contoured rear seats, imitation wood trim for the instrument panel, opening rear-quarter windows, lighted locking glove-box, assist straps, and a center console.

The ultimate Capri II was the "S" package. Finished in glossy black with gold accents, it was a sign of the times. Anodized gold was applied to the standard black steel styled wheels or cast-aluminum rims, the latter of which were a $113 option. "S" interiors included black vinyl bolsters with gold soft-weave fabric, black carpets, and blackout trim for the instrument panel. Dual racing mirrors, a heftier suspension, and upgraded sound insulation were also included.

(While there was no mention of it in the American sales literature, the color combination reflected the schemes used by Ford-powered John Player Special Lotus racers that were tearing up the Formula 1 circuit at the time. In England, this package was officially known as the JPS edition.) Later in the model year, a white version of the svelte "S" hatchback would become available.

For all other Capri IIs, there was a choice of nine colors, with five interior color combinations. Also offered in black, dark brown, or white-depending upon the exterior color-were vinyl tops, a $95 option.

Some of the more popular extras available on the Capri II included the $276 Select-Shift automatic transmission, air conditioning for an additional $429, the manually operated sunroof at $181, rear-window defogger for $69, as well as a rear window wiper costing another $48. Most important was the addition of the AM radio at $71, or the much more desired AM/FM unit at $136. With the new hatchback design, a vinyl tonneau-style luggage compartment cover was a new extra-cost item at $29.