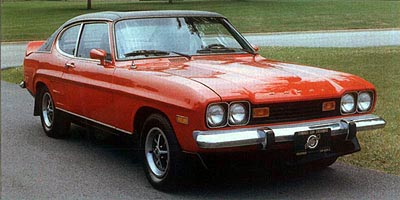 Front and rear spoilers on this V-6-powered 1973 Capri are aftermarket add-ons.

While 1971 Mercury Capri customers were pleased with the car's sporty appearance, the lack of engine and transmission choices turned off other shoppers. But even with the limitation in powertrain selection and the midyear introduction date, he 1971 Capri still set records for calendar-year sales of a first-year import: 17,258 units, and dealers were taking confirmed orders for twice that number for the upcoming year. Sales in the first month alone came to 2,021 cars, which effectively cleaned out all existing dealer stock.

In another parallel to the first Mustang, despite their spring release, these early units were titled as next-year models in the U.S. Then, when the "true" model year began later in the year, there were a number of small changes that added up to some major improvements.

To address the requests for more potent performance, another engine selection was made available beginning in the fall of 1970. American buyers could opt for the larger "2000" inline four, displacing 1,993 cubic centimeters and rated for an even 100 horsepower at 5,600 rpm. This peppier little four could pull itself right along with 120 pound-feet of torque at 3,600 revs.

A derivative of the British "Kent" engine family, it featured a single overhead camshaft with a single downdraft Weber carburetor and solid lifters. Furthermore, it could be teamed with a three-speed automatic transmission, a $185 option. Meanwhile, a compression boost hiked output of the base engine to 75 horsepower.

In the wake of these improvements, Road Test named Capri its "1971 Import Car of the Year," and other enthusiast publications of the day did an about-face in light of the available extra horsepower. Even with improved 0-60-mph times, the Capri was actually capable of producing better fuel mileage ratings, partially due to the 3.44:1 rear axle that came with the 2.0-liter engine. As Road Test stated when the award was made, "We feel that when quality, appearance, luxury of trim, utility, handling and performance are all evaluated as a package at a given price, the Capri clearly shows as a winner."

Even Car and Driver changed its tune about the Capri, saying, "It certainly is no stone, as astonished owners of Fiat 124 coupes, Porsche 914s, BMW 2002s and fuel-injected Alfas will begrudgingly attest. The Capri will not only out-sprint these traditional heavies on the enthusiast scene, in the hands of a capable driver it will leave them embarrassed in the corners." Other benefits C/D pointed out were passenger comfort and usable storage space. All of this came for a price of about $2,600 delivered, far below several of the other cars mentioned, such as the BMW 2002, which opened up in the $3,300 range, and the Porsche 914/4, pegged at $3,595.

Needless to say, there were no notable exterior or interior differences between early- and late-production 1971s, with the exception of color selections. Two new choices were fielded: Silver metallic and one of the most popular colors for this model, Capri Yellow. Life was good for the Capri family as more than 53,000 were delivered in 1971.

Not everything was perfect within the Capri camp, though. Customers complained about squealing brake pads, a problem that would plague Capris until 1976, when a new semiabrasive pad material was employed. Door-hinge squeaks and some electrical problems were also common in production models. Ford worked diligently to take care of these complaints, and overall, the Capri was actually constructed to higher quality standards than many contemporaries.