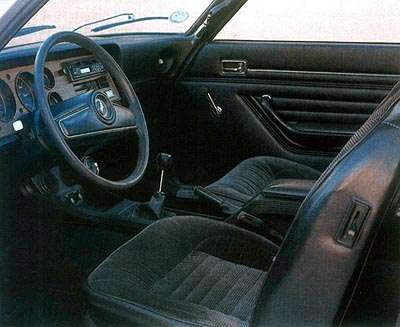 While customers were happy with the feel of the Capri, handling in early models was an issue.

The front suspension on the 1970 Ford Capri used a MacPherson-strut design with independent spring-type ball joints and double-acting hydraulic shocks. Supporting the car were two helical coil springs that some found a bit soft and a little mushy in hard turns. In the rear, a triple thin-band leaf spring was used in conjunction with hydraulic shocks mounted in a staggered pattern to absorb quick acceleration. Wheelbase came to 100.8 inches and bumper-to-bumper length measured 167.8 inches.

While the body looked good, customers were happy with the fit and feel, and the consumer press had plenty of good things to say about the new Ford Capri, not everyone was happy with the car's handling capabilities. Going in a straight line was fine for many, but Europeans have lots of roads that go into mountains or wind through the countryside, and the need for an anti-sway bar was duly pointed out in several enthusiast publications.

Despite this small complaint, the first year of Capri sales in Europe was astounding: more than 156,000 units, the most of any European Ford model ever produced. Most of that first year's production came off the German assembly lines as labor and supply problems seemed to plague the British production.

Even before the first model year was completed, studies were launched into the feasibility of bringing the Capri to America. Since the close of World War II, there had been several European Fords imported into North America. They had some success in Canada, but U.S. shoppers generally preferred their domestic products. By the early Sixties, with Ford U.S. producing its own compact Falcon, the European imports seemed to go away almost entirely. Later in the decade the Cortina drew a few sales, but it was with baited breath that the idea of another imported Ford was greeted in America.

However, times were changing. Japanese compacts were beginning to catch on in America and motorists' attitudes were starting to shift. While the Capri was marketed as a Ford in Europe, it was decided that the Lincoln-Mercury Division would be a better outlet for the "Sexy European," as it came to be advertised Stateside. The Ford Division had just released another compact in the Maverick, and the Capri surely would have been in direct competition with it. Furthermore, the first U.S. Ford subcompact -- the Pinto -- was about to hit the streets.