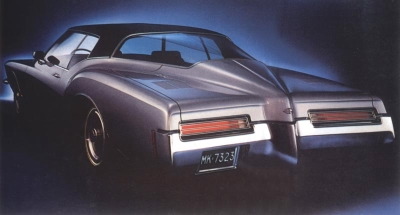 GM styling honcho William Mitchell determined that the 1971 Riviera would be different and daring -- and indeed it was, due mainly to the boattail design up back.
©2007 Publications International, Ltd.

A number of Buick Riviera styling changes would take place at the end of the 1960s. In fact, a major restyling was undertaken for 1966.

Designed by David Holls, this new Riveria featured a slim, horizontal grille behind which the headlamps were hidden. The windshield was more sharply raked than before, and in a trendsetting move, vent wings were eliminated from the side windows.

The Bentley-inspired “razor-edge” effect was gone, and the roof was given a modified fastback configuration. At the same time, the standard Riviera engine was bored an eighth of an inch, raising the displacement from 401.2 to 425.3 cubic inches and the gross horsepower from 325 to 340.

Styling changes for the Buick Riviera were modest over the next few years, but for 1967 the company offered a new family of V-8 engines.

As fitted to the Riviera, the new mill had very nearly the same displacement as its predecessor: 429.7 cubic inches. The stroke/bore ratio was increased, however, from .844:1 to .931:1, and better breathing was provided by means of bigger valves and enlarged ports. Standard horsepower now was 360 -- 20 more than the 1967 Cadillac.

A number of modifications were made for 1969. The General Motors Turbo Hydra-Matic 400 transmission replaced Buick’s Super Turbine as standard equipment, and variable-ratio power steering made its debut.

At the same time, Buick featured a new front suspension system called "AccuDrive,” boasting that it provided “the best directional stability ever experienced in an automobile.”

"Because of this relocation, when the wheel moved over an undulation, it tipped outward at the top, instead of inward, providing an opposing force. The two forces would effectively cancel each other out, keeping the car on a more nearly straight path.”

So good was this new suspension that by 1971 it would be adopted -- by corporate fiat -- at all five General Motors divisions.

By 1970, the Riviera was in its fifth year without a major styling change, and the public was obviously looking for something fresh and new from Buick.

The drop in Riviera’s 1970 production, which amounted to 15,506 units for the year, was offset nearly twice-over by a gain of 30,514 for the big Electra series.

But no matter, the time had clearly come for Buick to introduce a new Riviera. And when it did arrive, it was -- for better or for worse -- a sensation. Learn about the 1971 Buick Riviera on the next page.