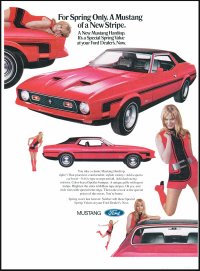 Running changes (updates made during a model year for various reasons) would become a vexing Detroit routine in the Seventies, and the Ford Mustang saw several before closing the '71 campaign.

Besides dropping big-block options, Ford fired the Boss 351 high-performance model around midseason. Sales were only 1806 to that point, evidently too few to satisfy Dearborn bean-counters. But then in April came a pretender of sorts, a "Sports Coupe" hardtop decked out like the Boss and Mach with a similar grille, twin-scoop hood, striping, and color-keyed front bumper, all for just $97 extra.

"This may have sold a few cheap hardtops," Mustang historian Gary Witzenburg huffed, "but it was also one more nail in the real high-performance Mustang's coffin." Exact production is unknown, but many experts estimate 500 -- not exactly a barn burner.

Another telling sign of the times appeared in May with a so-called "351 CJ" option. This was basically the HO V-8 with hydraulic instead of mechanical lifters, plus compression drastically lowered to 8.6:1 for knock-free running on the low-lead and unleaded gasoline then coming on the scene -- another response to government emissions standards. Even so, horsepower checked in at a respectable 280, channeled to a mandatory 3.50:1 rear axle through automatic or four-speed transmission. The competition suspension was a mandatory option.

In retrospect, the '71 Mustang probably deserved the bad press it got, but that's only because buyers had moved on in ways that no one could have predicted in 1968. Ford showed far better timing with its compact Maverick, which rang up close to 579,000 sales in a long debut model year and nearly 272,000 more for sophomore '71.

Mustang, meantime, again suffered right along with its peers, model-year sales dropping nearly 21.5 percent from 1970 to 149,678 units. Hardtops plunged to around 83,000, the convertible sank to a bit over 6000, and fastbacks did about 60,000, of which Mach 1 accounted for a healthy 36,500. At least Ford could still truthfully advertise Mustang as the most popular car of its type, as the archrival Chevy Camaro finished a distant second with 114,630 model-year sales, though admittedly with just coupes.

But Ford had little choice but to keep plugging away on the newly redesigned model. Find out what changes were made for 1972 on the next page.