Criticism of the 1971 Ford Mustang 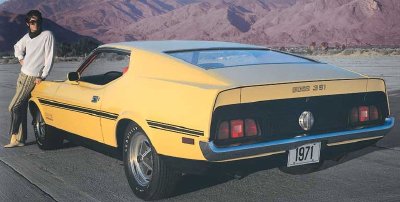 Poor visibility, particularly out of the fastback's rear window, was a common criticism.

The most controversial design element of the 1971 Ford Mustang was the racy fastback styling that had so fast captivated Ford president Bunkie Knudsen.

While conceding it "generally attractive," Car and Driver thought it "sabotaged" the car in a number of ways. "It's like sitting in a bunker. You can hardly see out. The windows are gun slits, the beltline comes up almost to your chin, and the nearly horizontal rear deck and wide roof pillars block off all but a shallow field of vision directly to the rear…. The long, level front fenders and the bulged-up hood block off an enormous area immediately in front of the car, and right turns, particularly those onto a section of road that falls away, are virtually blind."

In addition, the editors criticized the instrument panel as "a triumph of symmetry over function. [Main gauges] are well located…but other small gauges are so low in the center of the panel as to be well out of the driver's line of sight. Even worse are the heater controls…just above the tunnel…. To perform any adjustments, you have to lean well forward from the normal driving position -- a move which is entirely unnecessary."

Lest you think Car and Driver was unusually critical, rival Car Life had similar issues with the SportsRoof. "[The '71 fastback] is actually a flat back. The roof angle is only fourteen degrees. The rear window would make a good skylight. A glance in the rearview mirror provides an excellent view of the interior with a small band of road visible…." Dragstrip-oriented Cars magazine allowed that "you do become used to this after awhile," but complained that, exterior dimensions considered, "there isn't that much interior space. A big guy can get awfully cramped behind the wheel, even with the bucket [seat] in its rearmost position."

In fairness to Ford as a whole, and maybe Knudsen in particular, almost no one in those days bought a pony car for passenger room, trunk space, fuel thrift, or even visibility. Style and performance were usually all that mattered, and the '71 Mustangs offered those in abundance. Besides, if you couldn't come to terms with the SportsRoof environment, you could always opt for a hardtop or convertible that might accommodate you much better.

One critic called the dashboard "a triumph of symmetry over function", though by 1973 this optional Instrumentation Group made things a bit better.

Indeed, Motor Trend's lanky Chuck Koch judged his test 302 hardtop just fine "creature-comfort-wise," though he did think the driving position could be improved. "It would be as simple as offering a telescopic steering column, lowering the foot pedals and allowing for more seat travel." Koch also echoed C/D's gripe about needing overly long glances from the road to see controls and readouts in the center stack.

Reviewing all the road tests leaves little doubt that Ford's pony car had drifted far from its original concept, maybe too far. "While the Mustang is bigger than it has any business being, snorted Car and Driver, "it's certainly not the [aircraft carrier U.S.S.] Forrestal it would appear from the driver's seat. In reality, it's about the same size as the Camaro -- 1.5 inches longer and slightly narrower. [But] at least half our disenchantment…is based on poor visibility and an optical illusion of size…. Logically, the Boss 351 should be an American equivalent to Europe's high-performance GT cars…but lacking the feeling of lightness and agility as it does, it's not even close."

Koch provided a more balanced perspective, and maybe a more helpful one, in summing up Motor Trend's comparison test: "When considering the price and relativity of these three cars, you have to admit that, as much fun as the performance Mustangs are to drive, the plain hardtop with its 302-2V engine is the best buy. It exemplifies what Ford started out to do in 1964 with the first Mustang: build an inexpensive car that is still stylish and pleasing to drive."

The critics were on to something, as public tastes dictated several running changes during 1971. The next page tells you what some of those were.