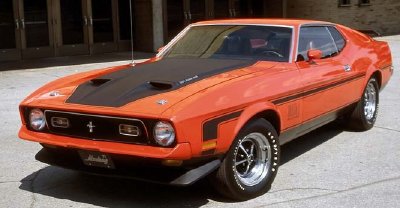 The Mach 1 had less power for 1971 but looked meaner, with standard chin spoiler and hood scoops, and optional two-tone hood paint.

At the top end of Mach 1 performance was again Mustang's big-block V-8. That engine was now a 429 -- which raised a few eyebrows -- but it wasn't the exotic semi-hemi of 1969-70. While this new Cobra Jet mill did have the same cylinder dimensions as the semi-hemi, it was essentially a short-stroke version of the Thunderbird/Lincoln 460-cubic-inch V-8, with wedge-type combustion chambers and conventional construction.

The 429 began the model year in regular (CJ) and ram-air (CJ-R) versions. Both had four-barrel carburetors, hydraulic lifters, and a nominal 370 horsepower, though most observers thought the cold-air ducting put the CJ-R at 380-385 horsepower. A solid-lifter Super Cobra Jet (SCJ) arrived a few weeks later at 375 horsepower, again with or without ram-air.

All 429s could be ordered with 3.91 and 4.11:1 rear axles, but the SCJ required those ratios and the optional Drag Pack with locking differential. None of these brutes was inexpensive at $372-$493, which likely explains why initial orders were so weak -- and why Ford decided to drop all three by midseason. Most probably went into Mach 1s, though they were technically available for any '71 Mustang.

A rear spoiler and Magnum 500 wheels were also optional.

According to Mustang chief program engineer Howard Freers, the 429 with its canted-valve heads "was a much wider engine than the 428, and that's why the car got wider" -- ironic in view of the engine's short tenure. "It took a [wider track] to get those monsters in there." But engineers took advantage of that to optimize handling for all models, which was "a major problem objective," Freers recalled. "I think we [improved] it…on the base model as well as the big-engine jobs." A key decision was fitting staggered rear shocks with any 351 or 429 engine.

The 351-cubic-inch engine was an upgrade from the base 302; racing-style twist locks were standard equipment on all Mach 1s in 1971.

The Boss 351 made most of the Mach 1 package standard -- and then added some options of its own. The next page tells you what this model had under the hood.