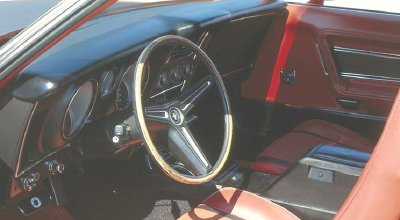 The three large round openings in the dashboard show the influence of the Chevy Camaro on the 1971 Mustang.

Like some of its exterior styling cues, the cabin of the redesigned 1971 Ford Mustang seemed to have been influenced by General Motors design cues of the day.

This was evident in a new reverse-angle instrument panel. Like recent Chevy Camaro dashboards, it had three large rounds ahead of the driver and a central "stack" housing radio, climate controls, air vents, and optional oil pressure, coolant-temp, and ammeter gauges. For price competitiveness, the Mach 1 "Sports" interior became a $130 option that was also available for other Mustangs (except the Boss model, where it was included). This option included woven-vinyl seat inserts, the problematic "Rim-Blow" steering wheel, molded door panels with front armrests, clock, and bright pedal trim.

The 1971 Ford Mustang Grande version came with many of these items but retained vinyl/Lambeth-cloth upholstery. The base interior was fairly plain despite including full carpeting and a new mini floorshift console. Standard lap and shoulder belts returned, but new "Uni-Lock" buckles allowed linking the upper webs to the lap belts for cinching as a unit, a convenience that presumably encouraged seatbelt use.

Another new safety feature was required by Washington: a longitudinal steel beam in each door to absorb side-impact energy. It proved its worth when the occupants of a '71 Mustang prototype emerged unscathed after being broadsided by another car during a public-road shakedown run. Chief program engineer Howard Freers was pleased that this "actual test" confirmed "all the lab testing done by body engineering."

The 1971 Ford Mustang offered several new options. Leading the list were power windows, electric rear-window defroster ($48), and a good-sounding AM/FM stereo radio (a stiff $214, but worth it). A vinyl roof option was added for fastbacks but was aesthetically debatable. Ford got into hot "Grabber" paint colors for several of its '71 model lines. Mustang listed a vivid blue, green, yellow, and lime under that name, plus a dozen more-conventional hues. Interiors were color-keyed in black, white, green, blue, red, and ginger.

Interior color schemes matched exterior paint jobs on '71s, but the logo, as always, was red, white, and blue.

After several years of wooing customers with extended warranties, the Big Three called a truce to save themselves some money. Ford's coverage reverted from one-year/unlimited miles to the traditional 12 months/12,000 miles. To make money, Ford began the model year by hiking prices five percent across the board, then adjusted some models in early October to account for equipment changes and competitors' moves.

Another option was the performance-oriented Mach 1 package. Find out what it entailed on the next page.