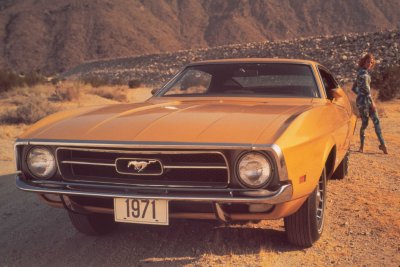 The Grande hardtop was one of three versions of the Ford Mustang available in 1971.

The redesigned Mustangs in showrooms for 1971 reprised base and Grande hardtops, a convertible, and Sportsroof fastbacks in regular and Mach 1 trim, plus a new Boss 351 version. Stylists didn't try to hide the expanded dimensions that Ford president Bunkie Knudsen and his product planners ordained. If anything, the new look seemed to emphasize the sudden growth spurt.

Though wheelbase was stretched just an inch to 109 inches, overall length tacked on 2.1 inches to 189.5. More significant was a near three-inch gain in overall width, to 74.1 inches, matched by broader front/rear tracks of 61.5/61.0 inches. Height was fractionally reduced to 50.1 inches on SportsRoofs, 50.8 on other models.

Though each of these changes was hardly colossal in itself, they collectively helped fatten the '71 Mustangs by some 500-600 pounds over comparable 1970s, with the heaviest models flattening the scales at over 1.5 tons. All very different from the lithe compact Ford started with just seven years before, which author Brad Bowling pointed out was some seven inches shorter and narrower, plus a good deal lighter.

If the '71s were heavier by design, at least they were quite tasteful per Mustang tradition. All models wore a higher beltline swept up behind the door, rounded body sides relieved by a simple half-length crease line, and neatly cropped tails with the trademark triple taillamps, albeit squashed a bit and rounded at the corners. Bumpers were slim U-shaped beams snugged close to the body. Grilles were blunted and full-width, with a dual-beam headlamp at each end.

Base models and the Grande capped hoods and fenders with a bright inverted-U molding curved down to meet the bumper ends as a sort of frame. Within the grille was a bright, broad rectangle bisected by a chrome horizontal bar carrying a corralled running horse -- back after a two-year absence.

The Mustang Mach 1 had distinct styling, including more steeply angled windshields and hoods that were extended back over the cowl.

The Mach 1 and Boss 351 had their own face, with a black, honeycomb-texture grille insert, a small "pony tricolor" emblem in the middle, and flanking "sportlamps" -- amber running lights wired in with the headlamps.

All models wore more steeply angled windshields, and hoods were extended back over the cowl to hide the windshield wipers, a dubious GM idea doubtless decreed by Knudsen and designer Larry Shinoda, both of whom had defected to Ford from GM with knowledge of the General's upcoming product line.

A convertible was offered in 1971, but ragtops were falling out of favor and only 6121 were built.

The Mach 1 borrowed another contemporary GM styling gimmick: a front bumper covered in body-color polyurethane plastic (with matching upper grille frame). Though not as "squashable" as the similar Endura-covered noses of recent Pontiacs, the plastic wrap did ward off dings while lending a purposeful look appropriate for the model.

Mach 1s also carried an angled chin spoiler; domed hood; honeycomb back-panel appliqué; bold body side tape stripes in black or argent (silver); and contrasting perimeter lower-body paint, again black or argent depending on main paint color. A freestanding Boss 302-type rear spoiler was available. A double-dome hood with simulated air scoops was a no-charge option. The scoops were functional when ordered with one of the top-power engines.

GM cues were evident inside the new Mustang as well. Find out more about the interior and optional equipment on the next page.