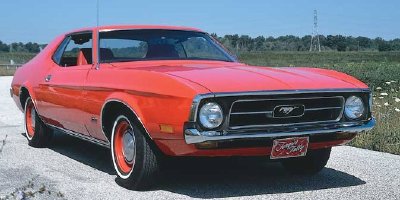 Mustangs looked much the same for 1972 save revised badging and standard (instead of optional) wheel-lip and rocker trim.

There was nothing Ford could do with its yearling but keep to plugging and hope the market might swing back Mustang's way. Predictably, the 1972 Ford Mustang didn't look very different, but there were plenty of changes underneath.

The most discouraging alterations occurred under the hood. First, stricter emissions standards dictated reduced compression for all engines to accommodate low-calorie 91-octane fuel. Second, Ford and other automakers now switched from quoting horsepower in SAE gross measure to the more realistic SAE net method -- which had the unhappy effect of making the actual power losses look even worse on paper.

Performance fans cried in their beer, but Ford made amends at midseason by reinstating an HO 351 option, albeit decompressed to 8.8:1 and 275 horsepower. As before, three-speed manual was the standard transmission for the six and two-barrel V-8s, with four-speed and Cruise-O-Matic optional. Four-speed was otherwise standard and Select-Shift automatic available -- except in California, where even stricter emissions levels mandated automatic with all V-8s. "California versions" would be another yearly burden for automakers in the Seventies.

At least the HO had low enough exhaust emissions to be sold in the Golden State, "a feat many other manufacturers (Chevrolet with its 454s, for example) haven't been able to accomplish," as Car and Driver noted in March 1972. The magazine got an early drive in an HO fastback, and though the thrill factor was inevitably lower than with the short-lived Boss 351, there was still a certain magic at work.

Repeal of the federal excise tax allowed Ford to trim base prices. This standard hardtop came down $182 to start at $2729.

"[This car] is no Little Lord Fauntleroy out to play," C/D reported. "It's big and it's self-assured. Everything is massive. When you lean on the Hurst lever…you can feel about 10 pounds of brass synchronizer rings and steel hubs sliding into position.... There is little demand for finesse, only machismo.... The HO doesn't really feel like a high-performance engine at all. You don't have to wait for the good part of the torque curve. It's there all the time -- flat rather than peaky like the old Boss 302s."

Of course, performance was down thanks to the lower compression and a less radical solid-lifter camshaft, but the '72 HO wasn't exactly sleepy, C/D reporting 6.6 seconds 0-60 mph and a standing quarter-mile of 15.1 seconds at 95.6 mph. And more go was readily available for determined hop-up artists with a Ford parts catalog. "Just change the camshaft (the adjustable rockers are already there) and raise the compression ratio back up where it belongs," C/D advised. "And if you are really serious you'll bolt on a higher-capacity intake manifold and carburetor."

Best of all perhaps, this HO was available in any '72 Mustang. And it looked amazingly cheap at $119, though it required other equipment that added up to a fairly stout delivered price. Among these mandatory options were the comp suspension ($29), F60-15 tires on wide wheels ($92), power front-disc brakes, 3.91:1 rear axle with Traction-Lok ($56), and heavy-duty battery and radiator. "But you need that stuff anyway," C/D asserted. "And when you get it all you find that the 351 HO drives just like last year's Boss [351]. It rides like a Grand National stocker [and] understeers -- plenty. Ford apparently likes its cars that way."

The 1972 Mustang Mach 1 was a good candidate for Ford's optional emissions-tuned 350 HO V-8, which would be Ford's last performance V-8 for quite a while.

C/D spoke for many performance fans in summing up this Mustang: "The idea of paying more [over $4000 delivered] for a slower car is irritating, but that's the way it is in 1972. Still, the HO does have some potential. Which is more than can be said about most of the competition." Sad to say, this would be Mustang's last performance V-8 for a long while.

With sales still sluggish, mid-year changes were necessary again in 1972. On the next page you'll find out what some of them were.