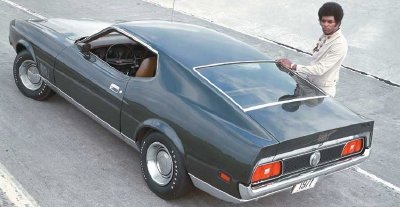 Depending on your point of view, the 1971, 1972, and 1973 Ford Mustang is either a run of decent cars that have been misunderstood down the years or a symbol of everything wrong with Detroit.

In its day, this fourth-generation series was roundly criticized as oversized, overweight, and overwrought. It was undeniably the biggest, heaviest, most "styled" Mustang ever. Sales were the lowest of any Mustang to that point, yet the three-year total was nearly 410,000, a more than respectable figure for the time.

Go where vintage Mustangs gather today and you'll see far more of the 1965-70 and post-1978 models. Yet like some other period Detroiters, these "Clydesdales" are at last getting their due, being gathered in and preserved by those who grew up with them, fans who have the same affection for "their" Mustangs as older folks have for the Sixties cars of their youth.

In short, times change and all things are relative, to use two old clichés. But these Mustangs also demonstrate how every car is a product of its particular era, shaped by prevailing social and economic forces and especially the personalities of those who design and build it. They also remind us again of the auto industry's perennial problem with lead times -- really "lag" times. Like the ill-fated Edsel, the ponies might have been a real success had they born three years earlier.Like its contemporaries, the '71 Mustang was created in the heady atmosphere of the late Sixties. U.S. car sales hit a new all-time high in 1965 -- Mustang, of course, had something to do with that -- and though the market had since cooled a bit, it remained plenty strong through late decade. Buyers were flush in a booming economy, and with each passing year they seemed to crave more size, more power, more luxury, and more gadgets.The Pontiac GTO had touched off a mania for "muscle cars" that had Detroit racing to stuff almost every model -- pony cars included -- with the largest, most potent engines possible. That's why Ford made room in the 1967 and 1968 Mustangs for a big-block 390 and 428 V-8 options.But all too soon, the go-go good times came to a screeching halt. As Gary Witzenburg observed in his authoritative Mustang history: "The horsepower race that had been going on since the automobile was invented was just about over by the time the 1971 Mustangs were introduced on August 20th, 1970. The federal government's mushrooming mountain of safety and emissions and damageability requirements, over-reactions to legitimate concerns, had caused a massive rethinking of priorities in Detroit. Motor City was a fortress besieged by regulatory Huns. The drawbridge was up and the moat loaded with crocodiles.

For specifications and other cool information on Mustangs from today and years past, check out: