Upon examining the 1970s Chevrolet Corvette concept cars, it seems that for one brief shining moment, General Motors honestly intended to build a midengine Corvette for public sale. The moment came in late 1977, just as "America's only true sports car" was about to celebrate its 25th anniversary.

Regrettably, the decade-old "Shark" model had to carry the birthday banner, because the midships Corvette wasn't slated until 1980.

But enthusiasts wouldn't have minded the wait, for the car in question was a virtual clone of the stunning Aerovette, perhaps the most widely admired of the many mid-engine experiments with which GM had been teasing Corvette lovers since the late 1950s.

Those tantalizing exercises were owed to Zora Arkus-Duntov, fabled as chief Corvette engineer almost since the car's 1953 inception. After conjuring the open-wheel CERV I single-seater and envelope-bodied CERV II (the letters stood for Corvette Engineering Research Vehicle), Duntov turned to more passenger-oriented designs, beginning with the Astro II of 1968.

Like the previous year's Corvair-based Astro I, this was a curvy, ground-sniffing two-seat coupe with a lift-up rear engine cover/cockpit canopy. It was also a remnant of project XP-880, a mid-engine effort that Duntov hoped would appear in showrooms for 1968.

Artful detailing and balanced proportions are some of the highlights of the breathtaking 1976 Aerovette
©2007 Publications International, Ltd.

There was still hope, however. Go to the next page to learn about project XP-882.

The XP-882 would have stayed under wraps but was shown to counter Ford's announced sale of 1971 Italian-built DeTomaso Panteras.
©2007 Publications International, Ltd.

After GM passed on the Astro II, Zora Arkus-Duntov quickly turned to what would be the genesis of the Aerovette -- the Chevrolet project XP-882 concept car. It definitely looked like a Corvette, with overtones of the 1968-vintage "Shark" model in its low vee'd nose and four-lamp tail treatment.

Because Duntov's previous mid-engine proposals carried Chevy V-8s in longitudinal fashion, they required a costly, purpose-designed transaxle that not even vast Chevrolet could justify for a low-volume sports car. Here, Duntov tackled the problem by turning the engine 90 degrees and putting a stock GM Turbo Hydra-matic "end on" to it.

The transmission for this concept car was driven by chain from the crankshaft and connected to a stock Corvette differential via a short driveshaft turning a right-angle at the front. Because the driveshaft had to pass through the sump, it was encased in a tube. If not an elegant solution, it was at least affordable.

Duntov's engineers built two XP-882s during 1969, an identical pair of swoopy fastbacks with an unfortunately blunt front but a dramatic louvered boattail, as on the experimental Mako Shark II of four years before.

Yet almost on the day they were finished, John Z. DeLorean became Chevy general manager and canceled the program as impractical and costly. His decision stood only a year.

When Ford announced plans to sell the Italian-built mid-engine DeTomaso Pantera through Lincoln-Mercury dealers, DeLorean ordered one XP-882 cleaned up for display at the 1970 New York Auto Show. But though car magazines were quick to proclaim that the mid-engine Corvette had finally arrived, GM never said anything about production.

See how the story of 1970s Corvette concept cars continues in the next section. 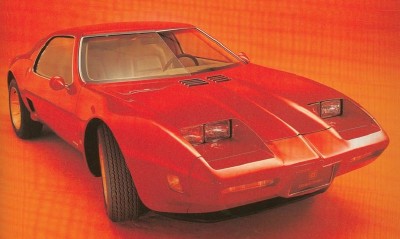 Exceptional aerodynamics was the overriding design goal of the Chevrolet Corvette Four-Rotor concept car. At just 44 inches high, the Four-Rotor tested out with a drag coefficient of only 0.325 -- better than many production cars of 20 years later.

But its real triumphs were sumptuous sensuality and remarkable symmetry. Unlike most midships designs, the Chevrolet Corvette Four-Rotor concept car gave no clue as to the location of its engine; indeed, its styling would have suited a front-engine layout just as well.

And where most "aero" bodies had definite edges, this one cleverly disguised them. The result was organic, "all-of-a-piece," and nearly timeless -- a triumph of surface over line.

The Four-Rotor was arguably more stunning than the Two-Rotor XP-897GT. Its Corvette-like face and obvious high performance potential were taken as strong suggestions that GM was brewing a radical new Corvette for the late 1970s or early 1980s.

Jerry Palmer, who would shape the sixth-generation 1984 Corvette, was among the designers who worked on the Four-Rotor car, which was first shown in late 1973. Car and Driver magazine thought it "the betting man's choice to replace the Stingray," but that winter brought the world's first energy crisis, which exposed the Wankel as a relative gas guzzler. With that, GM scrapped its rotary work and all plans for Wankel-powered cars.

Three years later, the Four-Rotor was still under a sheet in GM's Special Vehicles warehouse. Like DeLorean (who left GM in a huff during 1972), Mitchell had the car dragged out, this time to replace the double-Wankel with a Chevy 400 V-8.

After changing the I.D. to "Aerovette," Mitchell lobbied for the car as the next Corvette. He usually got what he wanted, and GM chairman Thomas Murphy actually approved the Aerovette for 1980 production. Ironically, he might have been at least partly swayed by the imminent threat from the rear-engine DMC-12, the now-infamous sports-car effort of none other than John Z. DeLorean.

Check out the next page for details on the Aerovette.

The Four-Rotor Car got a transplanted V-8 in 1976 to become the Chevrolet Aerovette concept car, which came close to production four years later. GM design chief Bill Mitchell kept its original lines intact, however -- not that there was reason to fiddle.

The interior was more fully engineered than the typical concept car, another indication that the Aerovette was indeed a serious production prospect.

The process to make the Aerovette production-ready moved swiftly. A full-scale clay was ready by late 1977, and tooling orders were about to be placed. The showroom model would have had a steel frame with Duntov's clever transverse driveline and probably a 350 V-8, which was then Corvette's mainstay engine.

Transmissions would have likely been the usual four-speed manual and three-speed Turbo Hydra-Matic, and suspension would have come off the old "Shark" per Duntov's original cost-cutting aim.

So despite its complex gullwing doors, the Aerovette wouldn't have cost a whole lot more to build than a front-engine Corvette. Indeed, 1980 retail price was projected in the $15,000-$18,000 range.

Best of all, the gorgeous styling would have survived completely intact. As Mitchell later confirmed: "The only difference between the Aerovette and its production derivation was an inch more headroom. Otherwise it was the same."

But once more, the mid-engine Corvette was not to be. There were several reasons. First, the project lost its two biggest boosters when Duntov retired in 1974 and Mitchell followed suit three years later. Ed Cole was gone by then, too.

A further blow came from Duntov's successor, David R. McLellan, who preferred the front/mid-engine concept over a rear/mid layout for reasons of packaging, manufacturing economy, even on-road performance.

The interior of the Aerovette was more fully engineered than that of most concept cars.
©2007 Publications International, Ltd.

But the deciding factor was sales -- or rather the likely lack of same. Though Porsche, Fiat, and other import makes had all proffered midengine sports cars for several years, none had sold very well in the United States.

Go to our final section to learn about one more 1970s Corvette concept car -- the mid/V-6.

It bears mentioning that GM explored one other avenue at the same time as the production Aerovette -- a mid/V-6 Chevrolet Corvette concept car with running gear taken from the planned new 1980 X-body compacts.

It was the same idea later applied to Pontiac's Fiero: a transverse front-drive powertrain plunked behind a two-seat cockpit to drive the rear wheels.

The contemplated engine was the now-familiar 60-degree 2.8-liter V-6 then in the works at Chevrolet. Styling was created by the Chevy Three Production Studio under Jerry Palmer, which sculpted clean, somewhat angular lines with Aerovette overtones.

But the mid/V-6 was doomed by the same factors that killed the Aerovette. It had other drawbacks, too.

As Car and Driver later recounted: "A new front-engine/rear-drive Camaro had just been approved with [350-cid] V-8 capacity; there was no way a V-6 Corvette could continue as the flagship of the Chevy fleet without turbocharging and intercooling, and it would be tough to sell such a costly, high-tech alternative to management.

"At the same time, the corporation had yet to develop a transaxle that could withstand the torque such an engine would produce. In addition, GM had big plans for widespread use of its X-car components in future high-volume

With that, work toward a new front-engine design got underway in earnest during 1978. The result appeared five years later, in time for Corvette's 30th birthday. Mitchell later compared its styling to a "grouper."

Tellingly, this sixth-generation Corvette failed to equal the sales performance of the old "Shark," encouraging hopeful types to anticipate yet another fling with mid-engine design. But those hopes were dashed by GM's 1993 announcement that the next-generation Corvette, which debuted in 1996 as a 1997 model -- would continue the familiar front-engine rear-drive configuration.