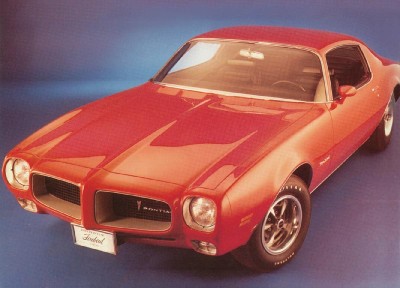 Just a few months after the first Firebirds went to customers, developers were busy with the next generation. This time, The 1970s Pontiac Firebird would not accept Chevrolet's leftovers. So although engineering efforts began at Chevrolet, Pontiac stylists and engineers joined their counterparts in the early stages.

The basic profile was decided fairly early. Aiming at mass-market acceptance, this eye-catching new Firebird would be a sleek, slippery semi-fastback, wearing a trunk lid and minimal chrome.

A bold split-grille and bumper were combined into a color-keyed "Endura" plastic nose, following the lead of the 1969 facelift. Nearly everything else appeared fresh -- a radical departure from the original F-bodies.

Deleting the rear quarter windows produced the close-coupled look of a two-seater, with vast B-pillars and lengthy door windows. Appearances sometimes deceive, and to many eyes the new Firebird, with its reduced-height cowl, looked a lot longer and lower. Dimensions actually hadn't changed much, but few disputed the car's taut, newly aggressive demeanor.

A wraparound rear window was proposed, but delayed. Designers experimented with Targa-roofs, notchback and full fastback bodies, and concealed headlamps. A convertible was also considered, but falling ragtop sales scuttled its prospects.

"Pontiac announces the beginning of tomorrow," insisted early ads, yet the 1970 model year began sans Firebird. Because of tooling and engineering problems, the debut was delayed until February 26, 1970; thus, its popular designation as a 1970 1/2 model. Meanwhile, leftover '69s were listed in Pontiac literature without model-year identification.

The lineup began with a no-frills coupe, powered by a 155 horsepower Chevrolet six (replacing the extinct overhead-cam engine). Beneath the hood of the step-up Esprit-billed as an "honest luxury sports car" -- sat a 350-cid V-8. Next came the Formula 400, packing a standard 330 horsepower, 400-cid V-8.

See the next page to continue to read about the Pontiac Firebird throughout the 1970s.

Changes for the 1970 Pontiac Firebird Trans Am

Styling for the 1971 Firebird was virtually unchanged from the 1970 model.
©2007 Publications International, Ltd.

The 1970 Pontiac Firebird Trans Am, again enticing an image-conscience crowd, wasn't just an option anymore, but a full-fledged performance machine. That meant a 400-cid V-8 with Ram Air induction delivering a 345 horsepower wallop.

But this time, Ram Air came courtesy of a new rear-facing "shaker" scoop that was part of the air cleaner assembly, and poked through a hole in the hood. Enthralled onlookers could watch the scoop shake and shimmy with every pulse of the brawny motor beneath.

Pontiac beefed up the Trans Am's suspension, while also adding body cladding that included an air dam, spoilers, and air extractors. Some of the raucous extras were for show, but others actually did aid aerodynamics. Developed by engineer Herb Adams, the Trans Am was intended as the most serious rival to the Corvette.

From the moment of its appearance at the Chicago Auto Show, the follow-up Firebird caused a sensation. However, it greeted a changing world. With government regulations growing and insurance companies boosting the rates on hot cars, consumer tastes were shifting. Unlike nearly all of its competitors, though, Pontiac elected to ignore the pressures and continue to focus on high performance.

Development had begun under John DeLorean's stewardship, but he was replaced by Jim McDonald as Pontiac's general manager in 1969. Nevertheless, DeLorean's belief in the market strength of teenagers helped ensure Pontiac's role as a major player in performance. After all, 46 percent of Americans were under 25, and therein lay the Firebird's customer base.

Bill Porter took over exterior design duties from Jack Humbert in 1968. Porter later acknowledged that for inspiration, stylists had contemplated such cars as the Lamborghini Miura -- and even DeLorean's personal Maserati Ghibli.

While designers sought a unique Pontiac personality, engineers demanded greater performance -- and a tighter grip around corners. Both factions were rewarded for their efforts. The result, according to GM historian Gary Witzenburg, was "at once voluptuous and muscular -- one-half Italian exotic, the other California hot-rod."

Hot Rod magazine branded the new Firebird "ahead of its time -- which only means the car is now what it should have been from the beginning." Ride quality was considered smoother and softer, courtesy of reduced spring rates and a driveshaft tunnel that allowed more suspension travel.

Due to the start-up ills and short model year, Firebird volume failed to reach expectations. Pontiac had projected 60,000 units, but settled for 48,739. Most were base or Esprit models; only one-fifth Formulas or Trans Ams. 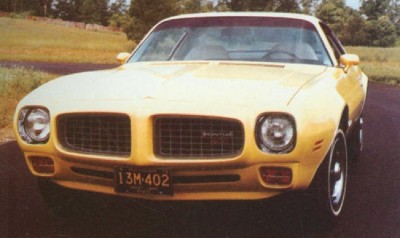 After a troubling time for muscle cars in 1971 and 1972, sales increased for the 1973 Pontiac Firebird, although much of the styling remained the same.
©2007 Publications International, Ltd.

Each model year brought departures from the muscle car ranks, yet Pontiac continued to push its "Ultimate Driving Machine." For the 1971, 1972, and 1973 Pontiac Firebird, product planners wanted to appeal to a broader spectrum of customers. Therefore, the Formula could be ordered from mild to wild, with either a 350 or 400-cid V-8, or even the big new 455-cid engine.

As a portent of things to come, compression ratios were cut, so all GM engines could run on regular fuel. Nevertheless, with 325 or 335 horsepower on tap, Firebirds remained potent machines. Trans Ams carried the 455 V-8, but accounted for only a small fraction of total output.

Only a new honeycomb-mesh grille insert and minor interior upgrades marked the 1972 Firebirds, which carried the same engine choices.

What appeared to be a dramatic drop in horsepower and torque figures was due largely to a switch from "SAE gross" to "SAE net" ratings. Reflecting the engine's power output with all accessories attached rather than running unencumbered, the "net" figures were considered more realistic.

Rumors ran rampant that GM was ready to drop the Camaro and Firebird because of low sales in a rapidly dwindling ponycar market. Despite a slight drop in prices, Firebird output plummeted by a startling 44 percent.

Much of that decline, however, resulted from a lengthy strike at the Norwood, Ohio, assembly plant. In the end, Pontiac's sport coupe won a reprieve as a result of "lobbying" by certain corporate honchos.

"You obviously take the excitement of driving pretty seriously," said the 1973 sales brochure to Firebird customers -- most of whom were likely to concur. "Trans Am is as serious as they come."

Bold graphics livened the Trans Am, led by a monstrous bird decal on the hood. Conceived by John Schinella, and derided by some as the "screaming chicken," this emblem would nevertheless become an easily recognizable -- and welcomed -- Trans Am trademark.

Powerplant choices were essentially unchanged, and most buyers ordered a 350-, 400-, or 455-cid V-8. But topping the engine list was a new Super-Duty 455, initially yielding a claimed 310 horsepower.

Only 1295 were installed in Firebirds in 1973-74, and most actually contained a milder camshaft, for a rating of 290 bhp. No matter; that was still well above the 250-horse figure for the regular Trans Am engine. The Super-Duty amounted to a streetable race car, one of the few all-out performance machines offered in 1973.

Sales improved considerably for both Camaro and Firebird. A total of 46,313 Firebirds were built, as Trans Am output rose to an impressive 4802 units.

But world events would quickly threaten sporty, high-performance cars. Arab oil-producing nations enacted an embargo during 1973-74, making drivers face long lines at the gas pumps and the prospect of rationing.

By the time oil was flowing freely again, the era of automotive muscle had virtually come to an end. Ford abandoned its muscular Mustangs in favor of a shrunken successor, initially sans V-8 options.

Dodge's Challenger and Plymouth's Barracuda were about to depart, with AMC's Javelin/AMX soon to follow. Still, Chevrolet and Pontiac hung on.

The 1974 Pontiac Firebird received a much-needed facelift. Directed by John Schinella, it included a switch to a sloping, "shovel-nose" Endura front end, with the traditional divided grille inserts recessed into rectangular frames.

Ads promoted the Firebird as "Part engineering. Part soul." Yes, soul -- a factor generally thought to be disappearing from American automobiles. Sure, Trans Am dropped back to a standard 400-cid V-8; but the Super-Duty 455 could still be ordered.

Despite high fuel prices, Firebird sales rose appreciably. A total of 73,729 were built, including a record 10,255 Trans Ams (more than double the 1973 output). This at a time when Pontiac's overall sales were down sharply.

Clearly, the Trans Am nameplate was gaining a following -- and an image -- of its own. Exposure in movies and on TV didn't hurt; James Garner, an auto racer in private life, began to drive Firebirds on TV's The Rockford Files. A few years hence, hard-driving Burt Reynolds would pilot a black Trans Am in Smokey and the Bandit and its sequels.

Prices rose again, yet Firebird sales edged upward. In what was a bad year overall for the industry, output reached 84,063 units, of which nearly one-third were Trans Ams.

Production shot up further yet in 1976, as 110,775 Firebirds left the plant. Trans Ams accounted for a whopping 42 percent of the total, as the 455-cid V-8 hit the options list for the last time.

The Endura front end got a modest aero reshaping, taillamps were modified, and integral body-color bumpers installed. Formula Firebirds could get bold graphics along rocker panels and door bottoms. For those who couldn't quite afford a Trans Am, the Formula was emerging as an attention-getting alternative.

Options for 1976 included a canopy-style half-vinyl roof and a T-top. Because of production problems, only 643 T-tops were installed, but it would become a popular item later. All went on the first "Special Edition" Trans Ams: black/gold beauties that marked Pontiac's 50th anniversary.

On the next page, read about how the Firebird continued to grow in popularity as the 1970s came to a close.

"Hearts flutter at its mere mention," said sales brochures of the Trans Am, whereas a Formula coupe was "for driving fanatics." Trans Ams could get a higher-output (220-horsepower) V-8 in 1978. Produced by slightly higher compression, that was the first boost in potency since 1973.

A facelift for 1979 made the Firebird's "beak" more pronounced, as rectangular headlamps moved into separate recessed pods. Full-width "blacked-out" taillamps disappeared when not in use. Four-wheel disc brakes became optional on Formulas and Trans Ams for the first time.

A Trans Am served as official pace car for the 1979 Daytona 500 race in February. Later in the year came less-welcome news: another fuel crisis, resulting from the Iranian revolution.

Corporate scheduling called for an all-new Firebird (and Camaro) for 1980, but that wouldn't happen just yet. After a turbocharged Trans Am paced the Indianapolis 500 race, Pontiac issued a limited run of Pace Car Replicas. Underhood: a turbo edition of the Trans Am's 301-cid V-8, cranking out 210 horsepower (70 more than the carbureted 301).

Output dropped by half in this recession year, but all automakers were suffering more or less equally. Even the presence of Burt Reynolds posing for the 1981 sales catalog couldn't keep sales from slipping further, but Pontiac wasn't worried. An efficiently downsized Firebird for the Eighties was already in the works.

We've gathered a collection of some of the best examples of Pontiac Firebirds from the 1970s. Explore the links below for a brief history and photos of each car.