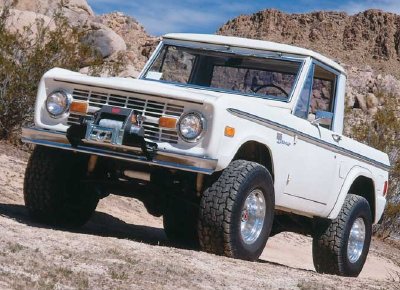 Nineteen seventy-seven marked Ford's 60th year in the trucking business, and the company made no attempt to hide that fact in advertising. Ranchero and Courier trucks were updated, and dress-up packages influenced by the success of the Cruising Van were offered on some other truck lines.

And at the end of the 1977 model year, Ford's F-Series pickup truck was christened the number-one-selling vehicle in the United States.

With the sport-utility-vehicle market shifting toward larger models, the original-style Ford Bronco took its final bow in 1977. This preserved example has been converted to a pickup, a type not made by the factory since 1972.

The Ford Courier got new looks and the choice of a second model with a longer seven-foot cargo bed.

Although touched on only lightly in the 1977 F-Series pickup truck catalog, four-wheel-drive models (including the Bronco) were attracting enough interest to warrant a brochure of their own, which included this image.

A Ford F-100 "Shorty Flareside" with four-wheel drive shows off the flashy graphics and abundant accessory choices that were aimed at younger buyers who wanted to personalize their trucks. The 117-inch-wheelbase Flareside featured a 61/2-foot cargo bed.

The Ford F-600, which was available with a crew cab, took over at the bottom of the revised medium-duty F-Series when the F-500 was dropped.

Ford's Bronco received a 1978 redesign and the W-Series was replaced with the CL-9000s. Learn more about 1978 Ford trucks on the next page.