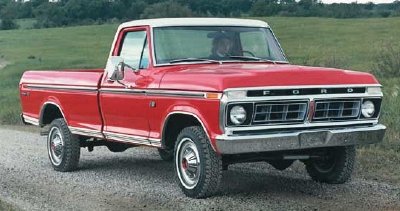 Customized vans were trendy back in the mid 1970s, and Ford decided to cash in on this youth-market phenomenon by introducing some factory-customized models for 1976. Ford basically did what a private owner might do: add custom wheels and exterior decoration, and upgrade the interior with fancier seats and trim. Ford called these custom Econolines Cruising Vans, a very appropriate title.

On the large side of the truck ledger for 1976, Ford also offered a new Louisville model called the LTL-9000. This new premium model was basically a long-nosed version of the regular L-Series truck.

The first styling facelift to the 1973-generation Ford F-Series light-duty trucks showed up for 1976, when a new grille and squarish headlamp bezels appeared. F-100s with four-wheel drive, like this long-bed Ranger XLT, came with a standard 360-cubic-inch V-8 engine and four-speed transmission.

The short-wheelbase F-100 Flareside returned after a three-year hiatus. A pinstripe option package was added midyear.

Four-wheel-drive Ford F-150s were initially offered only in long-bed form (shown), although a short-bed version was added midyear.

The Mazda-built Ford Courier got a revised grille and a three-inch-longer cab that allowed for more seat travel.

The Ford L-Line grew with the addition of the LTL-9000 truck. This new linehauler, distinguished by its lengthened nose, came with a Cummins NTC-350 diesel engine and 10-speed Fuller Roadranger transmission as standard equipment.

After 60 years in the trucking business, Ford's F-Series became the #1 seller in the United States in 1977. Continue to the next page for more details.