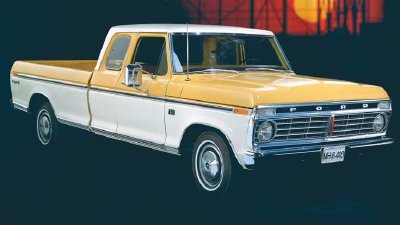 While most of Ford's focus was on a smaller new Mustang for 1974, trucks were not completely ignored. New for the F-Series that year was its first extended cab, which allowed buyers to carry extra passengers or more cargo inside the cab.

Ford responded to Dodge's pioneering 1973 extended-cab pickup with the SuperCab, which joined the F-Series roster in June 1974. The 22-inch-long extension was large enough to accommodate an optional forward-facing bench or side-facing jump seats.

Now that there were two kinds, "conventional" pickup trucks became known as regular cabs. F-Series styling was carried over unchanged from 1973.

...and an F-350 Super Camper Special with a removable camper unit.

The 1974 model year marked the last in which the original Bronco would be offered with a six-cylinder engine.

An expanded and larger Econoline series, as well as a new Ford F-150 pickup truck were introduced in 1975. Continue to the next page for more details.