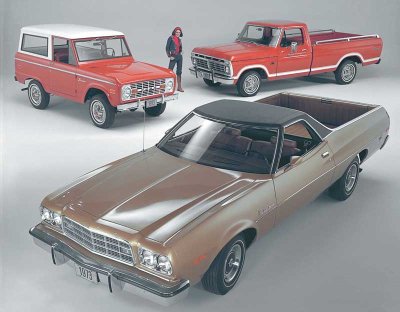 A selection of Ford's 1973 light trucks

The 1973 Ford truck model year brought a redesign for the Ford F-Series trucks, which included longer cabs and restyled exterior body panels. Ford also took this opportunity to update the extra-heavy-duty Cab-Over-Engine (COE) W-Series by rounding its corners to make it more aerodynamic. And Ford's Ranchero got a restyled front end, which incorporated the five-mph bumper mandated that year for its automotive counterparts.

But perhaps the biggest news of 1973 didn't come out of a Ford plant. In October of that year, the Oil Producing Export Countries, thereafter better known as OPEC, restricted the flow of oil to the United States, thus triggering America's first energy crisis. This would end up having far-reaching effects that went well beyond simply boosting the price of gas, as it prompted the government to enact Corporate Average Fuel Economy (CAFE) standards for vehicles that remain in effect today.

Ford's domestically built light trucks for 1973 included, clockwise from left, the Bronco, F-100, and Ranchero. The Bronco carried on in much the same form as it had since its 1966 introduction, but the F-100 had an all-new cab design and front sheetmetal, while the Ranchero featured a frontal facelift and -- thanks to its passenger-car ties -- an energy-absorbing front bumper.

The 1973 Ford Ranchero GT featured a new bodyside striping design, plus white-letter tires (in place of whitewalls) as standard equipment. Body-color racing mirrors, high-back bucket seats, and a 140-horsepower 302-cubic-inch V-8 engine were other basic features of this sportiest of the three Ranchero pickup truck models.

The Ranger trim package for 1973 Ford Broncos added fancy appointments inside and out, plus an external swing-away spare-tire carrier. The 200-cubic-inch six became the new base powerplant for Broncos.

Medium-duty Ford F-Series models like this F-750 Stake Body shared the light-duties' cab, but with a few detail alterations. Medium-duties had their own grille and fender styling, and incorporated some revised wheelbase lengths for 1973.

To combat competition, Ford introduced a SuperCab option for F-Series pickup trucks in 1974. See photos and learn more on the next page.