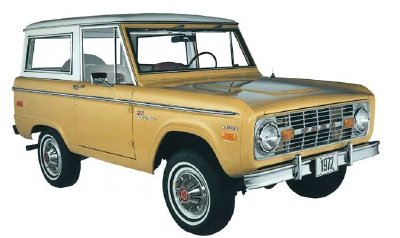 The Ford Ranchero truck underwent another update for 1972, but that wasn't the biggest Ford truck news that year. The biggest news was something small: the Courier.

Supplied by Mazda of Japan, the Ford Courier was a compact pickup truck with a four-cylinder engine, intended to compete against the increasingly popular small pickup trucks from Toyota and Nissan.

Until the Ford Courier started coming over from Mazda in Japan that spring, Ford's smallest and lightest truck offerings for 1972 were the wholly redesigned Ranchero and the carryover Bronco. Broncos with the Sport option package (shown here) featured bright trim inside and out, plus fancier upholstery.

All Ford Broncos also got bigger brakes in 1972. With tightening exhaust-emissions standards, the 302-cid V-8 became the base engine for California-bound Broncos, although the 170-cid six was still available there as a special-order item.

The extremes of the 1972 1/2-ton F-100 range: a full-dress Ford Explorer with lots of bright trim and colorful upholstery...

Four-wheel-drive Ford F-250s got a beefier Spicer front axle for 1972.

Redesigns ruled for Ford in 1973, with F-Series, W-Series, and Ranchero all receiving alterations. See photos and learn more on the next page.