Nineteen sixty-nine was a big year for big cars, with brand-new designs from each of the traditional "Low-Price Three." But where Chevy and Ford retained familiar styling cues, the 1969 Plymouth Sport Fury and VIP invited people to "Look What Plymouth's Up To Now" with the most dramatic overhaul of the bunch.

On paper at least, the '69 Furys were exactly the sort of family cruisers the market seemed to want. Shared with that year's new C-body Chryslers and senior Dodges was what Highland Park termed "fuselage styling," the fulsome, rounded look pioneered in spectacular fashion by the slick '68 Dodge Charger. Blown up to full-size scale, it was more lardy than lithe -- and less practical, with raised beltlines noticeably reducing glass area and thus outward vision. But Fury was at least clean and much smoother than before, with just enough knife-edged formality in front and rear fenderlines to appease more conservative types.

Without question the new models looked bulkier, and those looks were not deceiving. Wheelbase increased one inch from 1965-68 to match the 120-inch span of Fury's redesigned competitors (save 122 for wagons, still in the separate Suburban line created for '68). Overall length grew 1.5 inches to a massive 214.5, and width spread nearly two inches to a girthy 79.6. But despite appearances -- and long-held myth -- curb weights were only a few pounds higher model-for-model. The ragtop Sport Fury, for example, weighed just 19 pounds more than its '68 counterpart, the posh VIP hardtop sedan a mere eight pounds more.

There were no big technical changes for '69, so Fury still diverged from its rivals with unit construction (instead of body-on-frame), Chrysler's famed torsion-bar front suspension (versus coil springs), and a familiar lineup of reliable Highland Park engines ranging from the thrifty 225 Slant Six to a burly big-block 440 V-8.

A few styling features did have functional ramifications, however. Wipers, for instance, were now concealed GM-style by a rear hood lip, which seemed a good idea until they became really concealed by snow packed into their recess. Front-door ventwings vanished from air-conditioned hardtop coupes, controversial at the time because they increased wind noise. Also on hand were 15-inch wheels and tires (previously 14s), which didn't quite fill out the newly ballooned bodysides, but did allow for larger, more efficient brakes.

A new and little-known '69 Fury option grouped a two-barrel 383 V-8 with cruise control, power front-disc brakes, long-legged 2.76:1 axle ratio, undercoating, and headlamps-on warning lamp. Plymouth called this the "Turnpike Cruising Package." (One wonders whether they checked that name with Mercury.)

Go to the next page to learn about the 1969 Plymouth Sport Fury and VIPs popularity with consumers.

The Sport Fury and VIP still led Plymouth's line in 1969, though their popularity was waning.
©2007 Publications International, Ltd.

The 1969 Plymouth Sport Fury and VIP again headed the big-Plymouth line for '69. VIP expanded from two to three models with the addition of a "formal" hardtop coupe bearing a more upright rear window and wide rear quarters.

The old "Fast Top" was superseded as the sporty hardtop by a new style with narrower, more raked C-posts. As before, Sport Fury offered Plymouth's poshest, priciest convertible (at $3,502). The aforementioned VIP four-door hardtop remained the costliest non-wagon closed Fury ($3,433).

Unfortunately for Plymouth dealers, the high-profit VIP and Sport Fury generated fewer sales for a second straight year. Production of the "Very Important Plymouths" dropped nearly 4,000 units to just under 14,000, while the big bucket-seaters lost over 8,300 to close at about 18,000. Both still trailed Big Three competitors by substantial margins. Chevy's Impala SS was now an option package and no longer significant, but Caprice outdrew VIP by over 9-to-l-and Ford bested Plymouth by 16-to-l with its luxurious LTDs.

Sport Fury was no better match for Ford's sporty XL, which sold four times as many copies. Adding to the misery, Plymouth as a whole ran a weaker fourth in 1969, while Ford was a stronger second to industry-leading Chevrolet.

In short, Plymouth was selling fewer top-line big cars than either of its archrivals -- or third-place Pontiac for that matter -- which suggested that the market didn't equate Plymouths with "luxury" the way it did certain Fords and Chevys. More's the pity, too, for this would contribute to Plymouth's steady sales decline in the '70s.

Indeed, VIPs didn't survive past '69, replaced by bench-seat Sport Furys and, ultimately, "Gran" models. Sport Fury lasted only through 1971, with just a husky, 440-powered GT hardtop coupe to continue the performance tradition-one of Detroit's last muscle-bound biggies. In all, a sorry end for what had been Plymouth's best. 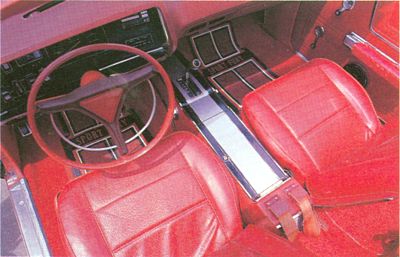 The 1969 Plymouth Sport Fury tried to appeal to those interested in a full-size sports machine by featuring standard bucket seats and V-8 power
©2007 Publications International, Ltd.

The 1969 Plymouth Sport Fury & VIP had no major technical changes from previous models, but they were differentiated by unit construction, rather than body-on-frame.