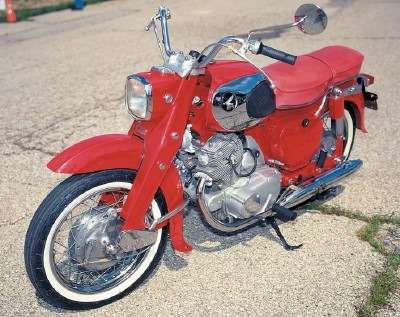 The 1969 Honda Dream 305 blended power and smoothness with style and practicality to create a unique package for its time. See more motorcycle pictures.

The 1969 Honda Dream 305 motorcycle was light and easy to handle, but could also reach nearly 100 mph thanks to its powerful 305-cc overhead-cam twin-cylinder engine.

The 1969 Honda Dream 305 motorcycle also could be dressed up with a dizzying array of saddlebags, luggage racks, and windscreens to increase its usefulness and individualize its personality.

Soichiro Honda's first effort, the 98-cc two-stroke Model D of 1947, was considered quite rough when compared to its competition. Since then, however, the company that bears his name has undergone some radical changes.

After years of development and growth, Honda found itself flirting with bankruptcy in 1953. But it managed to hang on, and in 1958, the C100 Super Cub was introduced. Powered by a 50-cc four-stroke single, the motorbike was an instant hit.

The Cub's light weight and step-through design appealed to a large audience, and by 1960, Honda was shipping more than 169,000 units per year to 50 countries around the globe.

The Honda Dream 305 motorcycle followed in its footsteps, and was likewise enjoying robust sales by the mid 1960s. Amazingly, its production run would last ten years.

By the late 1960s, consumer interest was moving toward larger, more powerful motorcycles, and Honda replaced the 305 Dream with larger twins and the formidable 750 four.

Go to the next page to see more pictures of the 1969 Honda Dream 305 motorcycle. 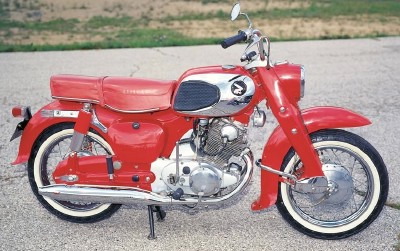 The Dream 305 was in production for a decade.

The 1969 Honda Dream 305 helped put the Japanese company at the forefront of motorcycle manufacturing.

Stamped-steel forks were a signature of the 305.
The heart of the Dream 305 was its smooth 305-cc single overhead-cam twin. It used a four-speed transmission.
The speedometer read to 100 mph, and the Honda Dream 305 could just about bury the needle.
The Dream's mufflers were polished stamped steel.