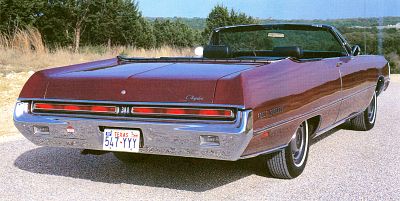 The creation of the 1969 Chrysler Three Hundred was due to the new "fuselage styled" models, which the Division proudly described in advertising as "Your Next Car." Years before, Virgil Exner had pioneered the idea of combining the bumper and the grille on his XNR show car, in which the bumper surrounded the radiator opening and lights. But unlike the XNR, the bodylines on the new Chryslers were free of creases, wrinkles, tailfins, and asymmetrical humps, making them appear very smooth and sleek. It looked as though 1969 would be a very good year.

At the corporate level, chairman Lynn Townsend was laboring to maintain the profit picture. On the production line, quality control became an end in itself for the first time in Chrysler history, and judging by road tests of mid-1960s models, it was truly needed. Production had been setting records (1968 was an all-time high at 263,266), but high volume was often achieved by compromising build quality.

The Chrysler 300 (non-letter) line of coupes, sedans, and convertibles had been introduced in 1962 to replace the Windsor, and capitalize on the sporting image of the "letter series" 300s. In market position, the 300 largely filled the gap left by the DeSoto, which breathed its last in 1961: an upmarket car just short of the New Yorker, square in the middle of the Chrysler range.

Since 1965 it had shared the New Yorker's long, 124-inch wheelbase, but it was carefully positioned about $300-$400 short of the New Yorker's price. For this, the buyer got a big engine (the reliable 440 from 1967), luxurious trim, and clean styling that traced its influence to the letter series. The 300 also featured the most expensive convertible in the volume line, since there had not been a New Yorker convertible since 1961.

Keep reading to learn about the styling and sales of the 1969 Chrysler Three Hundred. 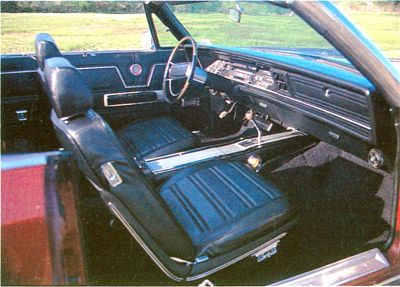 Model developments in the late 1960s reflected what Chrysler saw as the temper of the times and influenced the release of the 1969 Chrysler Three Hundred.

New Yorker wagons were quietly dropped for 1966, after selling scarcely 3,000 units the year before; Newport wagons commanded the utility sector, though by 1968 all wagons were confined to a separate Town & Country series with its own wheelbase. The four-door pillared sedan had been in and out of the line during the 1960s; for 1969 it was out.

That year's Three Hundred, therefore, was offered in only three body styles: the hardtop coupe, hardtop sedan, and convertible coupe. About 32,000 were built, including some 2,000 convertibles and an even number of two- and four-door hardtops.

And make no mistake, the name was now spelled out. This is a common practice when a manufacturer wants to impart more to a product than the product may really have. The Three Hundred was certainly no letter-series Chrysler, and it was not found on race tracks, but it was a solid, sporty big car that offered good value for the money.

Nor was its ancestry forgotten by the promoters. "It can hide its headlights, but not its heritage," went the refrain. "Its 440 V-8 and three-speed automatic transmission supply instant recollection of victories past. The combination of welded fuselage and adjustable torsion-bar suspension, a subtle reminder of rally championships ... a solid-yet-soaring driving impression."

Up front, that heritage was certainly unmistakable. Headlights were hidden (the only 1969 Chrysler with this feature) and the grille was in traditional black, a round "300" emblem supported by the famous cross bars. Invoking other familiar themes, the Three Hundred came standard with individual "pleated-and-pillowed bucket seats" divided by a center cushion and armrest. A center console could be ordered as an option. Instrumentation was comprehensive, but lacked a tachometer.

Alongside the standard 350 bhp 440 was the "TNT" 440 with four-barrel carburetor, high-performance camshaft, dual exhausts, and twin-snorkel air cleaner. This 375 bhp engine really had to be ordered by the serious 300 nostalgia buff. Useful too were power front-disc brakes and heavy-duty suspension.

With all these features, the Three Hundred was as roadable and rapid a big car as the American auto industry produced in 1969. At a time when the federal government and insurance companies were fast putting the dampers on high performance, that in itself was a fair achievement.

Keep reading for the specifications of the 1969 Chrysler Three Hundred. 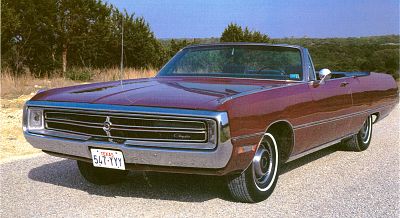 Though lacking the flair of past letter-series cars, the 1969 Chrysler Three Hundred nonetheless featured hidden headlights and discreet "300" badges to differentiate it from other 1969 Chryslers.
©2007 Publications International, Ltd.

The 1969 Chrysler Three Hundred bore the fuselage styling prominent in all Chryslers at the time, but it was the sportiest car of the bunch.