The 1969 AMX/2 concept car -- the prototype for the exciting 1970 AMX/3 production car -- was the first evidence that tiny, staid AMC was toying with a high-performance mid-engine sports car.

Dick Teague was always proud that he'd designed the 1970 AMX/3 -- so proud that he snared for himself one-third of those built. Sadly, that amounted to just two cars.

A lifelong car enthusiast, Teague loved most anything on four wheels, though as a car collector he favored vintage machines, which appealed to him as both simple and nostalgic next to the modern iron he worked on during 25 years as design vice-president for American Motors. Even so, those two AMX/3s sat cheek-to-jowl with his big White steamer and massive Pope-Hartford touring right up until his untimely death in 1991.

Designer's vanity? Not at all. The AMX/3 (sometimes written "AMX/III") remains one of the prettiest cars on the globe: low, smooth, curvy in all the right places, adroitly proportioned. Teague had every right to be proud of it.

But good looks are only part of the story. The 1970 AMX/3 was also a high-performance mid-engine sports car that came very close to production, which would have been no small achievement even if volume would have been scarcely more than the six examples ultimately built.

Still, while Chevy teased the public with midships Corvettes that would never be, little AMC was briefly on the verge of building a Euro-style supercar the public could actually buy.

car -- in the next section. 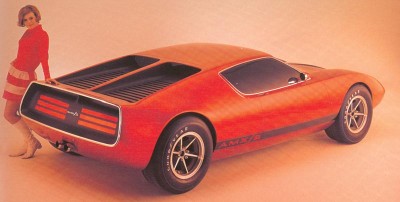 Italian designer Giorgetto Giugiaro's team duly produced a full-size mock-up in lightweight foamcore that was shipped to Detroit for "comparison competition." Never publicly shown, it bore the low, angular lines then typical of Giugiaro, but looked lumpy next to the league group's model, which resoundingly carried the day.

Yet despite its all-AMC design and engineering, the resulting AMX/3 was quite European in many ways. For example, noted race-car engineer and builder Giotto Bizzarrini supervised chassis development in Italy, and BMW assisted with testing.

The four-speed transaxle in the first AMX/3 came from ZF in Germany, though OTO Melara of La Spezia, Italy, was later tapped for a new gearbox and final drive that could better withstand the hefty torque of the installed AMC 390 V-8.

Per mid-engine practice of the day, that V-8 mounted longitudinally behind a snug two-seat cockpit, with the transmission trailing behind.

Suspension was by classic all-around double wishbones and coil-over-shock units, with dual springs at the back and an anti-roll bar front and rear. Brakes were big four-wheel vented discs from Germany's Ate.

This well-developed mock-up shows the final form of the 1970 AMX/3. It was photographed in AMC's design showroom.
©2007 Publications International, Ltd.

Despite weighing some 3,100 pounds, the AMX/3 had an estimated top speed of 160 mph, thanks to its 340-horsepower engine and fairly short 3.45:1 final drive. Unfortunately, high-speed stability was none too good.

Teague later recalled that Bizzarrini drove an AMX/3 on the demanding Nurburging in Germany and "became nearly airborne at 145, so that kind of slowed him down. . . . It did get very front-end light."

So was the 1970 AMX/3 development program successful? Learn all about the car's debut in Rome in 1970 on the next page. 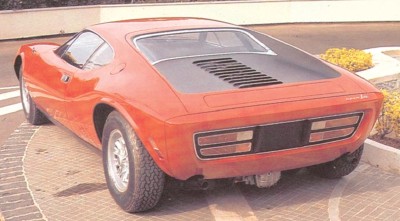 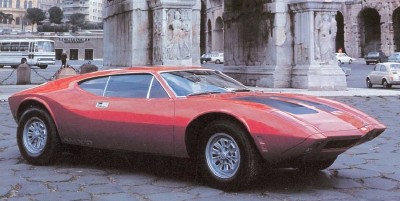