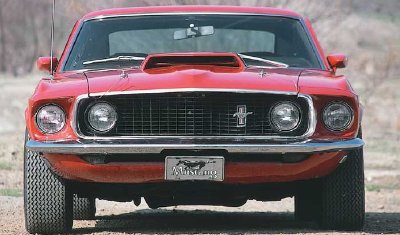 The Boss 429 was one of the most thrilling '69 Mustangs, built to meet racing rules.

The Boss 302 was a stunning car -- but so was the other "ultimate Mustang" that Knudsen cooked up, the Boss 429. This big-block brute was born of Ford's desire to certify a new "semi-hemi" 429 V-8 for stock-car racing. NASCAR required at least 500 production installations, but didn't specify which models. So although Torinos showed up at the track, Ford qualified the engine by selling it in Mustangs.

Beside semi-hemispherical combustion chambers -- "crescent-shaped" in Ford parlance -- the Boss 429 engine employed thinwall block construction, aluminum heads, beefier main bearings, and a cross-drilled steel-billeted crankshaft. There were two versions of this "820" engine: a hydraulic-lifter "S" fitted to the first 279 cars, and an improved "T" version with different rods and pistons and either mechanical or hydraulic lifters. Both were nominally rated at 360 horsepower in street tune or 375 horsepower in full-race trim. But as with the H.O. 302, these were low-ball numbers to avoid raising the ire of insurance companies that were now fast hiking premiums on all performance cars.

The semi-hemi was too large for even the wider '69 Mustang engine bay, so Knudsen ordered engineer Roy Lunn to find a solution. Lunn turned to Kar Kraft, the Brighton, Michigan, specialty shop that built many of Ford's racing cars at the time. Together they found just enough space by modifying the front suspension, front wheel openings, and inner fenders and moving the battery to the trunk. For all that, front track increased only 0.8-inch. To resist body flex in hard acceleration, diagonal braces were added between the wheelhouses and firewall. Kar Kraft set up a special mini-assembly line for the Boss 429, but the engine installation was a time-consuming shoehorn job and production was slow to get rolling. Even so, a creditable 852 examples were built between mid-January and July.

The Boss 429 was a bit more stealthy outside than the Boss 302, but both came with competition-style hood pins.

Outside, the Boss 429 was a bit more subdued than its small-block brother despite wearing a similar rear wing and the same F60 3 15 Polyglas tires on seven-inch-wide Magnum 500 wheels. Its front spoiler and large functional hood scoop were unique, as were the discreet i.d. decals on the front fenders. Power steering and brakes were standard here, as were engine oil cooler and a 3.91:1 Traction-Lok differential. Detroit No-Spin axles were available. Automatic and air conditioning were not offered, but the big Boss was surprisingly lush for a factory drag racer, as the Exterior and Deluxe Interior Décor packages were standard. Ford also threw in the Visibility Group consisting of glovebox lock, parking-brake warning lamp, and lights for luggage compartment, ashtray, and glovebox.

At $4798, the Boss 429 was the costliest non-Shelby Mustang to date, which partly explains why the model was killed after only 505 more were built to 1970 specs. Then again, neither Boss was meant to make money; they were "homologation specials" that had to be sold to meet racing rules.

The Boss 429 was ready-made for the dragstrip and enabled Ford to qualify an exotic new "semi-hemi" V-8 for stock-car racing.