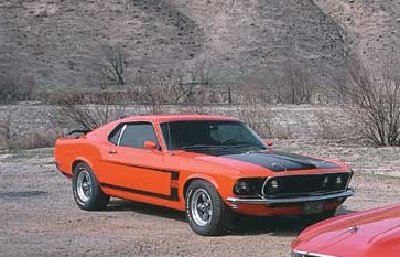 The Boss 302 fastback was one of the most thrilling '69 Mustangs. It was a low-volume hot rod built to meet racing rules.

Bunkie Knudsen and Larry Shinoda's "killer" fastback was ready by March and out to even the score with anything Mustang's pony car competition could offer, at least on the street. They were going to call it "Trans-Am" until Pontiac grabbed the name for its hottest '69 Firebird, so they settled on Boss 302. Trans-Am rules required 1000 copies be built for sale to qualify as "production," but Ford ended up turning out 1934 of the '69s. Despite even that low number, the Boss brought people into Ford showrooms like no Mustang since the original.

Shinoda's expertise in of "airflow management" showed up in the Boss 302's front and rear spoilers, effective from as little as 40 mph (unlike many such appendages). The four-inch-deep front air dam was angled forward to direct air around the car. The rear spoiler was an adjustable, inverted airfoil. Optional matte-black rear window slats did nothing for airflow but looked terrific. Without increasing power, engineers discovered the aero aids trimmed lap times at California's Riverside Raceway by about 2.5 seconds, a huge improvement.

Of course, there was an increase in power, and it was huge, too. Though the Boss's high-output 302 V-8 was said to produce 290 horsepower at 4600 rpm, actual output was estimated at closer to 400 (in prevailing SAE gross measure, not today's more realistic net horsepower). Ford spared no expense to ensure this would be a Trans-Am-worthy powerplant, installing new "dry-deck" Cleveland-style heads with 2.33-inch intake valves and no head gaskets, solid lifters, an aluminum high-riser manifold, super-high-flow Holley four-barrel carburetor, high-capacity dual-point ignition, four-bolt central-main-bearing caps, cross-drilled forged crankshaft, and special pistons. To prevent accidental over-revving, an ignition cutout interrupted current flow from the coil to the spark plugs between 5800 and 6000 rpm.

The Boss 302 was a street version of Ford's all-out Trans-Am racer.

For what amounted to a street-legal Trans-Am racer, the Boss 302 was an incredible value at just under $3600 to start. It basically came one way, though buyers could chose from close- or wide-ratio four-speed gearboxes at no charge. Power assist was recommended for the standard, ultra-quick 16:1 steering ratio. Another option involved Detroit "No-Spin" axles geared at 3.50, 3.91, or 4.30:1. The standard final drive was a shortish 3.50:1, available with or without Ford's Traction-Lok limited-slip differential (also offered with a 3.91 gearset).

Like the engine, the chassis was loaded with premium hardware: power brakes with 11.3-inch-diameter front discs and heavy-duty rear drums, high-rate springs, heavy-duty Gabriel shock absorbers (also staggered at the rear), and fully machined axle shafts with larger splines and nodular-iron centers. All '69 Mustangs boasted wider tracks, but they were even broader on the Boss: 59.5 inches at each end. Shinoda radiused the wheel wells to snug around F60 3 15 Polyglas tires -- or racing rubber.

Not functional but visually arresting were the matte-black paint on hood and headlight scoops, bold body side C-stripes with i.d. lettering, and eye-watering paint colors including bright yellow, Calypso Coral, and Acapulco Blue.