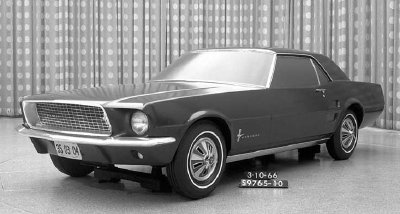 A March 1966 mockup anticipates the final '69 side treatment and general shape, but the front is a cautious evolution of 1967.

Work toward the '69 Mustang had begun in 1965 in the Ford Division studio, still captained by Gale Halderman. Joe Gilmore was now chief product planner, replacing Ross Humphries. From the very first studies in October 1965, designers seemed determined to blow up the car into a little Thunderbird, contemplating billowy contours, hidden headlamps, knife-edge fender lines, and other luxury-car cues.

By early 1966 they had been told to work in some "Thunderbird influence" -- which sounded like Iacocca talking. Regardless, the directive led to more large rectangular grilles, boxy rear ends, and some fairly desperate detailing. Judging from the photographic record, we might be grateful the designers changed course.

Indeed, they did a fast "180" toward an all-out muscle car. This reached fruition by October 1966 in a full-size clay fastback with a short wheelbase, a bulky cropped tail, a high rear "shoulder" leading back from a prominent scoop, a lengthy hood, gaping grille -- and a cramped cockpit. "We went through a period where we were chopping about six inches off the back," Halderman told Witzenburg. "But then we went to two inches and finally back to where we started, because we still had to package a spare tire, fuel tank, and some luggage room back there." Though a dead-end detour, this mockup prompted a less radical design that led to the '69 fastback, renamed "SportsRoof."

Ford again toyed with additional Mustang body styles during the '69 program. By mid-1966, designers had done full-size tape drawings of a "breadvan" wagon with near full-length side windows and a targa-top convertible with integral rollover bar (previewing the ragtop '68 Shelbys). The wagon had a tall "Kamm" tail like the short-chassis fastback, plus a long, tapering roofline and extreme rear-fender hop-up. The targa's lower body was curvy, almost GM-like. Though the targa was abandoned, the wagon design was refined into a full-size fiberglass mockup with slightly different treatments on each side.

This mockup from 1966 shows some of the design ideas rejected for 1969.

Photographed in November, it was an attractive, sporty thing with lots of side glass and elegant proportions. Rear fenders terminated in slim vertical taillamps arched gracefully upward from a thin U-section bumper. The front-end profile predicted production '71 styling. But with all that had gone before, a Mustang wagon remained a non-starter. "That one was pretty well liked," Halderman lamented. "I think we could have sold it."

Save last-minute details like taillights and trim, the '69 styling package was basically settled by early 1967. The result was a more impressive Mustang in both size and appearance. Though wheelbase stayed at 108 inches, overall length grew to 187.4 inches, up 3.8 inches, most of it in front overhang. Width swelled to 71.3 inches overall, while height came down slightly to 51.2. Base curb weight rose to just over 2800 pounds.

that were ultimately rejected for the final design.

Dimensional gains were evident inside, too. Thinner doors improved front shoulder room by 2.5 inches, hip room by 1.5 inches. Modifying a frame crossmember upped rear legroom a whopping 2.5 inches. Trunk capacity increased "13 to 29 percent," according to bubbly Ford press releases, but that didn't amount to much because there'd been so little space before. And at a quoted 9.8 cubic feet, even this larger hold could still manage a two-suiter and little else. At least driving range was usefully increased via a fuel tank enlarged from 17 to 20 gallons.