It's amazing what steady cultivating can do. In 1962, Plymouth's crop of downsized "standard" cars was like unwanted surplus. Yet with a few interim changes, their descendants of six years -- the 1968-1969 Plymouth Sport Satellite and GTX -- later sold more than a quarter-million copies.

Progressively nicer styling helped, but a more important factor was the 1965 return of a true full-size Plymouth, the 119-inch-wheelbase Fury. This allowed the existing 116-inch models (wagons: 117) to compete exclusively in the mid-size field, which they successfully did as workaday Belvedere I and II models and a bucket-seat twosome called Satellite.

For 1966, Plymouth lit every street racer's fire by making the famed 426-cid Hemi V-8 a regular production option for its mid-size cars, thus increasing their dominance of the nation's quarter-mile action.

The following year, this iron fist was wrapped in a velvet glove called Belvedere GTX, a lush buckets-and-console convertible and hardtop coupe packing a standard 375-horsepower wedgehead 440. All that remained was to fix styling that was looking literally and figuratively square against the latest from GM and Ford.

Chrysler did just that for 1968 with a fully redesigned B-body for Belvedere/ Satellite/GTX and Dodge's Coronet/Charger. Plymouth greatly expanded offerings into what it called "The Mid-Size 5."

A stripped Belvedere pillared coupe, four-door sedan, and wagon started things off, then repeated with a two-door hardtop and convertible as a "family" Satellite series (replacing Belvedere II).

Next up were a new Sport Satellite convertible, hardtop coupe, and four-door wagon with still-better trim, though not necessarily the best performance. That was reserved for the potent GTX duo and a new no-frills muscle coupe, the whimsically named Road Runner, which is a story in itself.

Unfortunately, even this slicker B-body proved to be less aerodynamic than the new ultra-smooth 1968 Ford Torino/Mercury Cyclone fastbacks, which ran faster around stock-car supertracks and into the Winner's Circle more often. But MoPar still ruled the drags, with the likes of Ronnie Sox and Buddy Martin adding to Chrysler's vast collection of Super Stock trophies.

Find engine details and more on the 1968-1969 Plymouth Sport Satellite and GTX on the next page.

The Sport Satellite's muscle-bound brother, the GTX, started out with a 375-horsepower 440.
©2007 Publications International, Ltd.

The 1968-1969 Plymouth Sport Satellite and GTX spanned a broad engine lineup: everything in the Chrysler cupboard from 225 Slant Six to the amazing Street Hemi -- still jokingly rated at 425 horses -- and the GTX's standard 375-horsepower "Super Commando" 440.

Most 1968 "Bs" carried extra-cost TorqueFlite automatic in lieu of manual three-speed, but GTXs included TorqueFlite and offered four-on-the-floor as a no-cost alternative.

Though Plymouth still lagged far behind Chevy and Ford in sales, its 1968 total of nearly 750,000 was a gratifying gain of some 111,000 over 1967. Significantly, intermediates accounted for about a third. Satellite was the volume leader by far, but non-wagon Sport Satellites managed around 22,500 and the two GTXs close to 19,000.

Predictably, the 1969s changed mainly in trim and appearance details, but speed freaks delighted in a monster 440 with three two-barrel carburetors. It was dubbed, naturally enough, "440 6-bbl."

Allegedly making 390 horsepower (and probably far more), it was a new option for the Road Runner, as was a functional "Air Grabber" hood and five special Performance Axle Packages. But the GTX got only the last; worse, its center console now cost extra.

Optional on the GTX was the fearsome 426 Street Hemi, conservatively rated at 425 horsepower.
©2007 Publications International, Ltd.

Though performance remained formidable-under 6.5 seconds 0-60 with the Hemi and automatic, a half-second more with the 440-the GTX was being shoved out of the spotlight by the cheaper "Beep Beep" car. Sales accordingly withered to 15,000, while Road Runner soared beyond 84,000. Sport Satellite improved, too, a new four-door sedan boosting 1969 volume to near 29,000.

The once-inspiring GTX would vanish two years later, while Sport Satellite, not all that special anyway, would simply be lost in a crowd of faceless family intermediates. Sad to say, Plymouth let its carefully cultivated garden of the 1960s become a weed patch in the 1970s. You know the rest.

Go to our final section for 1968-1969 Plymouth Sport Satellite and GTX specifications. 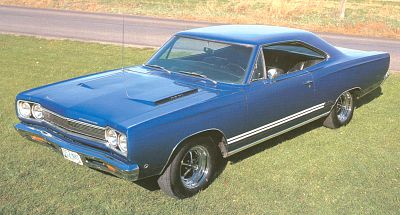