To enthusiasts, Hurst, a transmission builder that lent its name to the 1968-1969 Oldsmobile Hurst/Olds, was synonymous with precise gear changes.

Hurst Performance Products had been supplying its special brand of slick-action gearshifts to a number of manufacturers -- including Oldsmobile -- for some time. Anyone who wanted to run through the gears with the greatest of ease simply called upon Hurst for help.

Now, Hurst undertook an even closer tie with the hottest "Youngmobile." Result: one of the most remarkable Oldsmobile models of them all.

As described by Terry Boyce and Robert Lichty in "Hurst Heritage," Jack "Doc" Watson first created a one-off for Hurst, based on a 4-4-2 coupe. John Demmer, a Lansing industrialist, saw this prototype of what would become an "executive hot rod" and offered to construct production versions at his own factory.

John Beltz, Oldsmobile's chief engineer, liked the idea, believing it could help boost the company's performance image. Among those working alongside Watson on the project was one Robert Stempel, who later rose through the corporate ranks and served as GM's chairman. Watson explained to Motor Trend that he "wanted a car that would give all the acceleration you want in the straight, but wouldn't look like a floundering duck in the corners."

Long flexible tubes shot air through dual snorkels from ducts under the bumper. A less-wild variant with air conditioning also was created.

Except for the very first example, each carried Turbo Hydra-Matic, controlled by Hurst's own Dual-Gate gearshift, which allowed either fully manual or automatic operation.

Base color was Peruvian Silver (as used on the 1968 Toronado) with black stripes and panels, plus white pinstriping. Because the production line wasn't ready until April 1968, workers had to rush to get the first group out the door as 1968s. One man, Paul Hatton, did virtually all the pinstriping on that batch of 515 cars.

Of the total, only 56 were pillared coupes; all the rest were hardtops. Each wore a black-out grille and large black rear panel. Hurst promised "all the muscle characteristics of the finest super car, but without the objectionable interior noise and choppy ride."

Find out about the Hurst/Olds performance chops by continuing to the next page.

Motor Trend suggested -- only half jokingly -- that the H-O initials of the 1968-1969 Oldsmobile Hurst/Olds should perhaps stand for "Hairy-Olds." Needless to say, they were impressed with the joint-venture's skills, which included the ability to slam through a quarter-mile in a fraction under 14 seconds, passing 97 mph. The 0-60 jaunt demanded 6.65 seconds.

Hot Rod magazine ran a 13.9-second quarter-mile, at 103 mph. Jack Watson himself, the Hurst customizer who spearheaded the creation of the Hurst/Olds, managed 12.97 seconds (108.17 mph) for Car Craft, piloting the one and only Hurst/Olds four-speed, equipped with Hooker headers.

On the downside, this kind of "slam 'em into the seat" potential made the Oldsmobile coupe a friend to gasoline dealers. Owners couldn't expect much more than 10 mpg -- less if the temptation to hit it hard proved irresistible. Then again, even everyday V-8s of 1968 weren't too adept at passing gas pumps.

"Snarls softly and carries a big stick." That's how Hurst described the very different 1969 version, which lost much of its initial subtlety. This time, each example was painted white with Firefrost Gold striping.

A Cessna-inspired airfoil-type rear spoiler sat atop the deck. As many as 914 were built, with an engraved dash plaque showing the owner's name. Except for two convertibles, all were Holiday hardtop coupes. Motor Trend blasted a 1969 to 60 in 5.9 seconds, conquering the quarter-mile in 14 flat (at 101.3 mph). Road Test magazine actually was pleased by "an unexpectedly high 10.6 mpg, even with a lot of hard driving."

Lest there be any doubt, an emblem declared that H-O stood for Hurst/Olds.
©2007 Publications International, Ltd.

Both Oldsmobile and Hurst benefited from the partnership, and each company advertised the product. Not only did the Hurst/Olds coupe continue into the early 1970s, but subsequent versions popped up sporadically, reminding the initiated how much two performance experts working together can achieve.

Check out specifications for the 1968-1969 Oldsmobile Hurst/Olds on the next page. 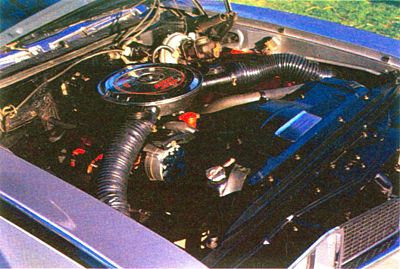 Because its 455-cubic-inch engine broke GM rules, the Hurst/Olds was assembled in a separate facility.
©2007 Publications International, Ltd.

The 1968-1968 Oldsmobile Hurst/Olds was built for speed and acceleration, and -- as you might expect of a car built by two performance experts -- it delivered just that.