Even at a glance, the Cutlass line -- including the hot 1968-1969 Oldsmobile 4-4-2 -- looked dramatically different for 1968. It had a new, smaller stance, with fresh fastback styling on a 112-inch wheelbase (three inches shorter than before), stretching 201.6 inches overall. Three models could have 4-4-2 equipment this time: the Holiday coupe, sports coupe, and convertible. In fact, 4-4-2 was now a series rather than a mere option package.

Front ends of the "Youngmobile for the purist" displayed a fresh appearance, with concealed wipers and a louvered hood. Quad headlights again resided in square housings, the pairs separated by rectangular parking/signal lights.

A large "4-4-2" insignia sat at the center of a rather narrow, rectangular crosshatch-patterned grille. Rear sculpturing was also revised. Dual exhausts exited through chrome collars notched into the rear bumper.

Not everyone was getting the performance message from Oldsmobile, as sales weren't exactly going through the roof. A new twist was needed. So Oldsmobile pushed harder with its Force-Air Induction System, which had debuted in 1967 on a small number of 4-4-2s.

To give the engine an extra jolt, the W-30 Force-Air collected cold air through intakes at the front bumper, cramming it into the carburetor. Coupled with internal engine modifications that included special heads and a high-output cam, Force-Air tacked 10 horsepower onto the usual 350-horsepower rating with a four-speed.

Few would have realized it from thumbing through the sales brochures, but 1968's series of 400-cubic-inch engines differed from the one used in prior 4-4-2s, with revised bore/stroke dimensions. A Hurst shifter operated both the wide-ratio and close-ratio four-speed gearboxes, as well as the standard three-speed. 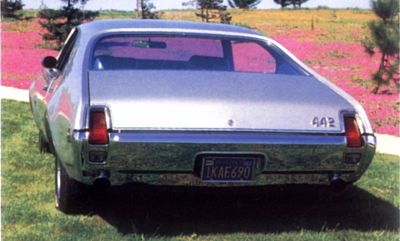 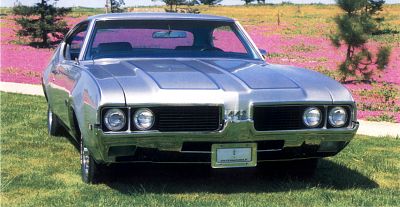 The 1968-1969 Oldsmobile 4-4-2 was well received by auto critics. One magazine named the 1968 Oldsmobile 4-4-2 its top performance car of the year, and others came up with very favorable results as well.