Mid-size madness afflicted the Dodge lineup for 1967 and began to roll out what became known as the 1968-1969 Dodge Coronet R/T and Super Bee Models, which included a 440 Magnum engine. As the name suggests, the new mill displaced a whopping 440 cubic inches -- this in a car that was typically thought of as supermarket and vacation transportation.

At least it didn't come as an ordinary sedan, but only in hardtop coupe and convertible dress, decorated by dual paint stripes and a hood scoop. Early R/T ads declared that the "rampaging" Magnum speaks softly, but carries "a big kick."

Dodge wasn't about to let Pontiac's GTO and other muscle-car rivals pull ahead in the marketplace, so the R/T package carried on when Coronets earned their 1968 restyling.

Ranking among the most attractive intermediates, the new Coronet wore rounded bodies in the popular "Coke-bottle" shape that enhanced its long, low silhouette. Like other members of the Dodge Scat Pack, the R/T came with "bumblebee" stripes wrapped around the tail, unless the buyer specified otherwise.

Standard again was the 440 Magnum V-8 with three-speed TorqueFlite. The 425-bhp Hemi engine and four-speed gearbox were available, too. Brakes were larger than on other Coronets, but front discs remained a $73 option.

So did special instruments, including a tachometer, which added $90. Exhaust gases exited through twin pipes, and a special handling suspension was standard. Both the hardtop and convertible wore all-vinyl bucket seats, and came in 16 colors.

"Acceleration is very rapid," declared Car Life after its test of an R/T convertible that rushed to 60 in 6.6 seconds, "yet the engine never seems to be laboring. The 440's brute torque makes high revving completely unnecessary."

To satisfy shoppers who felt an R/T coupe's $3,379 sticker was too high for comfort, Dodge added a budget-priced Super Bee during the 1968 model year. This few-frills, back-to-basics muscle coupe carried a special 335-bhp, 383-cid V-8, serving as Dodge's answer to the hot-selling Plymouth Road Runner. 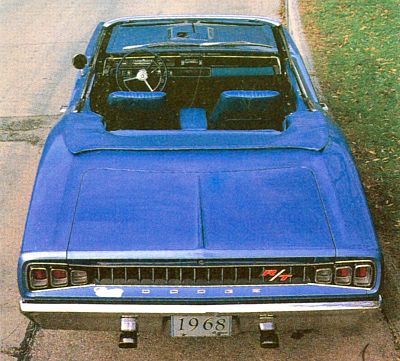 The 1968-1969 Dodge Coronet R/T and Super Bee featured big engines and big power, which were more than enough for the many families that owned them.