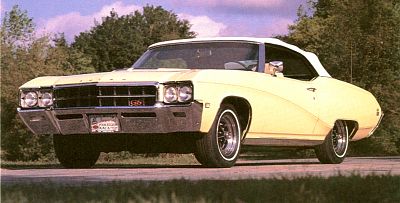 Decor was toned down on the 1969 GS, but other than that styling was little changed.
©2007 Publications International, Ltd.

No more bright strips were installed on front fenders. In fact, little brightwork at all decorated the 1969s, except for wheelwell moldings and five-spoke chrome wheels. Up front was a new eggcrate grille with large "holes." Dual paint stripes followed the sculptured sweepline down each bodyside. More noticeable yet was the lack of front vent windows.

The California GS made another appearance, wearing telltale front vents just like the Special Deluxe Coupe it actually was. Authentic or not, a California GS stormed to 60 mph in 9.5 seconds at the hands of Tom McCahill, inveterate tester for Mechanix Illustrated.

Added to the option selection for 1969 was Turbo Hydra-Matic, replacing the customary Super Turbine transmission. Acceleration freaks took greater note of the new Stage I engine package, which raised a GS400's output from 340 to 345 horsepower (at higher rpm). Doesn't sound like much, but it gave the car quite a jolt when the time came to stomp the pedal.

The Stage I package included a high-lift cam, special carburetor, dual exhausts, and 3.64:1 Positraction axle. To help keep all those horses flying, a short-throw Hurst shifter was available for the four-speed manual.

Corrosion remained a problem for Skylark/GS, and this wasn't Buick's high point for fit and finish either, but customers liked them anyway. A total of 21,514 GS Buicks were built in 1968 (including 2,454 GS400 convertibles), though the total slipped to 13,065 the next year. Even so, Buick ended the decade by regaining its long-lost fourth spot in the industry sales ranking.

Yet another "Stage" of performance would soon enter the GS lineup for the early 1970s, as the mighty V-8 grew to 455 cubic inches; after that, Buick settled back into its cushy image and the muscle-car era faded into history.

Check out 1968-1969 Buick Skylark and GS specifications on the next page.