The first series 1968-1969 AMC Javelin was perhaps the best from the standpoint of pure design. From every angle it exhibited designer Richard Teague's penchant for clean, flowing edges and corners. There were two models, both hardtops: a standard version, and the more luxurious SST, priced $105 higher.

AMC traditionally suffered from its aging Nash engines, so the Javelin's mechanicals were perhaps not quite up to date. Standard power was the old Nash 232-cid six combined with a three-speed manual transmission -- efficient, but not as powerful or up-to-date as the 1960s-spawned Slant Six of Chrysler, for example.

Still, you could order a good 290 V-8, which was comparable to Mustang's 289, and if that wasn't enough you could get what AMC called the "Go Package": 343 V-8 with 280 horsepower, dual exhausts, E70-14 tires, power front-disc brakes, the "handling" suspension, and special appearance details.

Today the Go-Package SST is more sought-after than the plainer Javelins, but they too have their charm and appeal to some collectors who use them as "daily drivers." They certainly don't look as much like products of 30-plus years ago as the contemporary Mustangs.

The 290 was a sweet little engine, not competitive in Trans Am racing (where it gave away a dozen cubes until they stroked it to 304 in 1970), but perfect for the street.

AMC was more than satisfied with their "ponycar's" first-year performance. They had hoped for 45,000 sales; they enjoyed 56,000. This dropped to around 40,000 for the 1969 models, but the "ponycar" rage had peaked, and Javelin's rivals were tailing off, too.

Uncluttered styling and a relatively commodious interior are the big pluses of the Javelin. One magazine in 1968 called it "nattily handsome, sprightly, tidy, altogether appealing." It is still those things today. 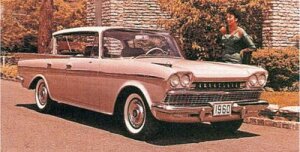