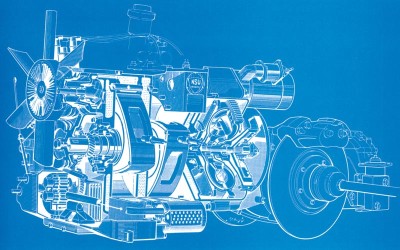 The NSU Ro80 began with NSU president Gerd Stieler von Heydekampf, who had joined the company as an advisor in 1948 and was named to its board of directors two years later. NSU had abandoned automaking in 1933, when its plant in Heilbronn was sold to Fiat, and had since concentrated mainly on motorcycles. After some 25 years, Heydekampf decided it was time to get NSU back into the car business, then beginning to boom in the economic “miracle” of postwar Germany.

The result duly appeared in 1958. Dubbed Prinz, it was a boxy minicar mounting an air-cooled twin at the rear in the manner of the increasingly popular Volkswagen Beetle. The initial 500cc model was soon joined by larger four-cylinder variants with more displacement and power.

Meantime, Heydekampf became interested in and encouraged the experiments of staff engineer Dr. Wankel, and soon committed NSU to further development of his rotary concept. That, in turn, led to the production Wankel Spider, based on the Prinz platform.

By 1962, Heydekampf and his sales executives had concluded that the minicar was doomed. What NSU needed now was a larger, less austere product to compete in the growing family-car market, the sector that traditionally generates the greatest sales volume. A year later, the company sold its motorcycle operations to Marshal Tito in Yugoslavia, leaving NSU entirely dependent on the auto business for the first time. Heydekampf promptly gave the go-ahead for a new car that was to be designed expressly for the Wankel, which looked ever more promising, and it was this program that would culminate in the Ro80.

Initially, the design brief called for a smaller, lighter machine than the one that ultimately emerged, with 80 horsepower and a curb weight of 800 kg (1,760 pounds). Heydekampf and chief engineer Ewald Praxl realized that their new volume entry need only be perhaps two steps up from the Prinz in size, price, and performance to match such established favorites as the Opel Rekord and Ford Taunus. But somewhere along the way, the target was moved.

The new twin-rotor Wankel proved more powerful than expected, so engineers relaxed their watch on the scales. By the time the dust settled, the car had ballooned into a rival for the junior Mercedes and BMWs, about five steps up from the Prinz and far more complicated and costly than anything Heydekampf had envisioned.

The Ro80’s semi-automatic transmission reflected Praxl’s desire that the new car be easy to drive. Unfortunately, it proved as quirky as the engine, having neither the convenience of a true automatic nor the sportiness and flexibility of a manual. As with Volkswagen’s “Automatic Stickshift” and Porsche’s “Sportomatic,” both of which appeared at about the same time, the Ro80 unit offered two-pedal control, but you still had to swap ratios by hand.

Grasping the knob of the floor-mounted lever triggered a solenoid that disengaged the vacuum-operated clutch (supplemented by a hydraulic torque converter). Once the shift was made and the knob fully released, the clutch would engage automatically. It was a good idea in theory, but most drivers never quite got the hang of it -- even with practice.

On the next page, find out where the NSU Ro80's design team got their car-building know-how.