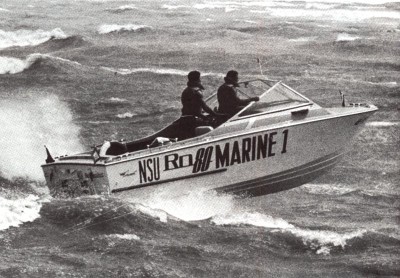 The NSU Ro80, with front drive and a fairly broad stance, delivered fine cornering, even though its tires were only 175x14s on five-inch-wide rims. And despite being saddled with a three-speed semi-automatic transmission and fairly short final gearing (4.857:1, giving 18.8 mph/1,000 rpm in top), performance was creditable, reflecting the slippery shape, a decent power-to-weight ratio, and good -- though not exceptional -- torque (118 pounds-feet).

For the record, a healthy Ro80 could hit 112 mph flat out and dash from 0 to 100 km/h (62 mph) in less than 14 seconds -- not bad for 115 horsepower pulling 2,668 pounds. But overshadowing all was the refinement of that rotary engine: revvy, quiet, nearly vibration-free. To a public weaned on noisy, rough-running reciprocating fours, it was a revelation.

The Ro80 was said to be a gas-guzzler. Actually, it was nothing of the sort. As with the first rotary Mazdas, consumption seemed high relative to engine size -- the combined chamber volume swept by the epitrochoidal rotors was a mere 995cc (60 cubic inches) -- but didn't look at all bad next to the available power and performance. Early examples typically returned 15.7 miles per gallon, but this author saw an actual 20.6 mpg on a 5,000-kilometer (3,100-mile) trip in a 1974 model, and that included crossing the Alps -- twice. The 1976 was even better: around 25 mpg at a steady 100 km/h.

Critics also branded the Ro80 an oil-burner. At first it was, with reported consumption as high as 1 liter/225 km (140 miles/quart). But after the aforementioned engine modifications, carried out in 1969 and 1971, this was lowered to within normal limits.

Looking back, the one main riddle still surrounding the Ro80 is not why it had troubles but why it was built at all. How could a marginal outfit like NSU, with such a skimpy automaking background, ever think it could tackle something so advanced? More to the point, since everything was riding on its first "proper" car, why didn't the firm field a more conventional package that would likely have proved more reliable and probably more profitable?

On the next page, read about how the NSU Ro80 was conceived and carried out by NSU's visionaries.